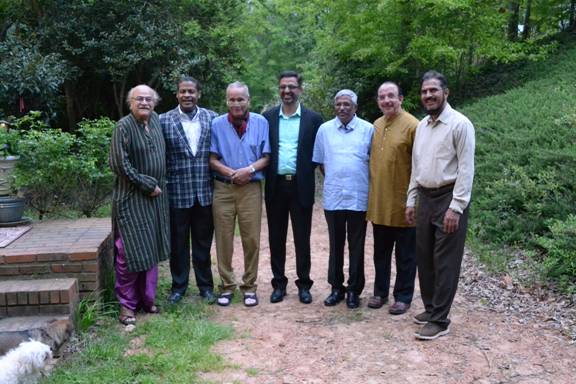 Atlanta, GA: Gandhians D.K. Oza, former Vice Chancellor and Dr. V. Ragupathy, Professor of Political Science at Gandhigram Rural University (GRU), Tamil Nadu, India have long been admirers of the Rev. Martin Luther King Jr. for his outstanding contributions to humanity and civil rights and in particular his “I Have a Dream” speech.

It was thus no surprise that they flew to Atlanta(the Civil Rights capitol of the world) to pay a weeklong (April 21-28, 2015) homage to Gandhi and the King legacy at the invitation of the Gandhi Foundation of USA (GFUSA), headquartered in Atlanta.

Oza and Dr. Ragupathy along with chairman Subash Razdan and executive director Antony Thaliath of the Gandhi Foundation of USA (GFUSA) got an up close look at the Morehouse College Martin Luther King Jr. Collection at the Atlanta University Center’s Robert W. Woodruff Library, on April 24. Dr. M.L. King Jr. was a student of Morehouse College in Atlanta.

Dr. Vicki Crawford, Executive Director of the Morehouse King Collection, gave an overview of the 10,000-piece collection housed in the Library.

“The interest in the Gandhi-King legacy will mirror and emphasize in the proposed endeavor for a Memorandum of Understanding (MOU) collaboratively between the Gandhi-King Center/Gandhigram Trust of Gandhigram Rural Institute (GRI) and the GFUSA”, said Mr. Oza, who also is a retired Indian Administrative Service (IAS) officer from Tamil Nadu cadre.  Dr. Crawford received the visiting delegates with great enthusiasm and even had brief discussions on the possibilities of exchange programs between the Gandhi King Center of GRI, GFUSA, and the King Collection at the Morehouse library.

The visiting delegates accompanied by GFUSA officials then met and networked with Dr. L. E. Carter, Dean of Religion and Founder, Gandhi King Ikeda Institute of Global Ethics at the MLK Jr. International Chapel.  Rev. Carter explained the ongoing activities of the MLK Chapel at Morehouse.

The next meeting of the day was with Dr. Gregory Hall, Professor and Chair, Department of political science Morehouse College. Prof. Hall suggested that a draft proposal for collaborative programs could be explored and developed. He reiterated the need to develop studies on the nonviolent strategies of Gandhi and King at theMorehouseCollege.

In the evening the visitors got together again at a working dinner at the residence of hosts Subash and Raj Razdan (of GFUSA) graced by many VIPs, dignitaries, diplomats and leaders of diverse groups, including Dr. King’s nephew, Hon. Isaac Farris, National Park Service Superintendent Judy Forte, Hon. Greg Pridgeon, former Council Member and Chief of Staff of the City of Atlanta, Hon. R. Srinivasan, Acting Consul General of India at the Consulate General of India (CGI), Atlanta, Ms. Ray Ann Kremer and Mr. George Shapiro of AJC (Ms. Kremer supported and attended the dedication of the Gandhi Statue in 1997 on behalf of the American Jewish Community), Mr. Mohsin (Treasurer of GFUSA) and many other community leaders.

Oza’s address included a power point presentation on the mission of Gandhi-King Center of GRI and the purpose of their visit. Dr. V. Ragupathy also explained the significance of taking forward the message of Gandhi and King to future generations. Hon. Srinivasan of the CGI appreciated the joint efforts of the GFUSA and GRI in propagating their mission and assured of encouragement and support for such humanitarian activities by the CGI.

Gandhigram in India, founded with the blessings of Mahatma Gandhi by two of his close disciples in 1947, Dr. G. Ramachandran and Dr. S. Soundaram, is now a well-known hub of Gandhian activities. Gandhigram is regarded as a national center for implementing the ideals of Gandhi in to action.

More than 50 years after Dr. King’s visit to Gandhigram, Subash Razdan, Chairman of GFUSA, visited Gandhigram in 2014 as a guest speaker for a seminar on “Lincoln, Gandhi and King”. It was during his visit an idea to commemorate King’s visit to Gandhigram through a permanent program in the name of Gandhi-King was discussed. On the initiative of Mr. D. K. Oza /Prof. V. Ragupathy [Ragupathy was a guest of GFUSA earlier at the Ekatva concert by GFUSA (in a joint-venture with a NGO of Ahmedabad and Atlanta community at Rialto auditorium in Atlanta on Jun 16, 2012) to benefit the needy children with their education in Gujarat], encouraged by Razdan and supported by Sri Sivakumar, the Gandhigram Trust came forward to start Gandhi-King Center in Gandhigram. Consequently, the Gandhi King Center for Peace and Justice was born and inaugurated by the Gandhigram Trust on July 11, 2014. An Advisory committee under the chairmanship of Dr. Natarajan, current Vice Chancellor Gandhigram Rural University, was also set up and is guiding the working of the Center. The Center is also in the process of initiating a large number of programs to spread the message of Gandhi and King especially among the younger generation.

“GFUSA is giving its constant support to the Gandhi King Center there. Razdan’s second visit to Gandhigram in February 2015 to give a special lecture at the Gandhi-King Center and the resultant networking further boosted the endeavor of promotion of the legacy of Dr. King and Gandhi jointly. The congratulatory and supportive message from the CEO of King Center, Bernice King for our Gandhi-King Center was also timely and very appreciated in India. It now behooves on us, in India, to reciprocate and create a befitting Memorial for Dr. King in India ”, remarked Prof. Ragupathy. “Razdan’s meetings with Mr. V.K. Sivakumar, secretary of Gandhigram Trust and Dr. Natarajan, Vice Chancellor of GRU also served as a catalyst to pave the path for our current visit to Atlanta. We are here primarily to explore the possibilities of developing collaborative activities in taking forward the message of Gandhi and King to and fro and across the continents.

The possibility of commencing short courses, seminars and workshops in the near future, at the Gandhigram on ‘The Life and Work of Rev Martin Luther King as inspired by Mahatma Gandhi’ may soon be a reality. “This visit by the two of us from Gandhigram, India is expected to put on a firm footing the planned collaboration of socio-welfare education between Gandhigram, GFUSA and allied partners such as Morehouse College, Emory University and even Ivy League colleges in USA”, added jubilant Oza.

The visiting delegates were also honored by the King Center with a VIP invitation to 88th birth anniversary celebrations, on Monday, April 27, 2015, of Coretta Scott King in the historic Freedom Hall,King Center where they were accorded a standing ovation and had the opportunity to interact with the children of prominent civil rights leaders.

Oza also attended the funeral/memorial service of the late Eva Galambos, mayor of the city of the Sandy Springs of Georgia. Mayor Galambos, a genuine friend of the Indian American community, worked tirelessly and successfully along with India’s former Ambassador to USA, Ronen Sen and Atlanta’s Subash Razdan to ensure that the new and the first Consulate General of India (CGI) would be in her city of Sandy Springs.

The following day, on April 23, the Visitors paid homage to Gandhiji by garlanding the Gandhi Statue, a national memorial in USA in the King Historic Site,Atlanta. The Superintendent of the National Park Service (NPS), Judy Forte along with her staff, welcomed the visitors and had discussions with regards to continuous cooperation between the agents of positive change inIndiaand in theUSA.

The Delegates then ‘Peace Walked’ from the Gandhi Statue through the Visitor Center Museum and the Historic Ebenezer Baptist Church (Heritage Sanctuary), laid wreaths (bouquets) at the Crypts (remains) of Dr. King and his wife Coretta Scott King.

“The federal district of the King Historic Site is at the hub of a 23 acre National Historic Site, which brings over one million visitors each year. Fortunately and auspiciously, the first monument the tourists see at the entrance to the Park is the beautiful life size bronze statue of Gandhiji gifted by the Government of India”, recalled Razdan. The Historic Park has become a prominent tourist attraction in USA. “The attractions of the Historic Park include the Statue of Mahatma Gandhi, birth home of Dr. King, the crypt of Dr. and Mrs. King, Ebenezer Church, exhibits at Freedom Hall, gift shop/information facility, the Gandhi Room, and the reflecting pool”, added Antony Thaliath of GFUSA. “ Such has been the impact of the Gandhi Statue, that there is hardly any VIP visitor returning to India from Atlanta without paying his/her homage to the hallowed federal Park”, exclaimed Mohsin Bharmal also of GFUSA.

On being asked about their visit to Atlanta, Prof. Ragupathy and Vice Chancellor Oza jointly thanked GFUSA, acknowledging, “The hosts Gandhi Foundation (GFUSA) took extraordinary efforts for the success of the mission of the delegates by creatively arranging all the groundwork for the meetings, visits and hospitality and for their support to continue to work with Gandhi – King Center in Gandhigram, India and elsewhere in the spirit to propel success for future joint ventures”.

“Gandhi’s life and his achievements inspired Dr. King to say, ‘Gandhi was inevitable. If humanity is to progress, Gandhi is inescapable…we may ignore him at our own risk…’. On the other hand, Dr. King’s engagement in civil disobedience and the protest movements for civil rights and human rights are historic. Dr. King’s leadership, unquestionably, reshaped the racial landscape in the entire continents of North and South America. The message and methods of Gandhi and King must reach the masses, especially the youths of the globe. They must understand that in highly pluralistic societies like India, USA and elsewhere, only nonviolence negotiations and mutuality can help with conflict resolution. TheGandhiKingCenterat Gandhigram shall strive to become a pioneering ‘Peace and Justice’ non-profit organization (NGO) inIndia”, reiterated the officials of GFUSA and Gandhigram in a joint statement.