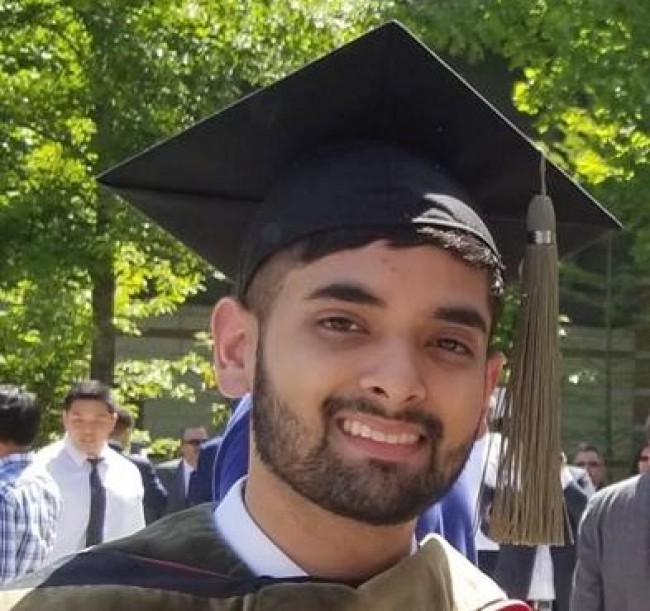 NRI Pulse Staff Report
Atlanta, GA, July 20, 2018: Gwinnett County police are searching for a recent University of Georgia graduate, Alvin Ahmed, 25, who was last seen at a Publix pharmacy where he works.
According to a Facebook post from older brother Kalvin Ahmed, Alvin has been missing ever since 9.15 pm Monday night and was last seen at his workplace at the Publix in Loganville.
“He was last wearing his Pharmacist coat, a dress shirt, black work pants, and work shoes and was bringing groceries home. He’s an innocent kid and had no enemies and kept to himself and friends.”
Kalvin thinks Alvin was forcibly taken away. “After speaking with his best friends and coworkers, he had no other plans but to be home. That’s the last thing he told me and our mom. The last recorded image was of him getting groceries for my mom. Those groceries were still in the car and his white coat was thrown into his car (he always neatly folds it according to all his friends and coworkers) and his car was unlocked and glove-box was rummaged through,” the post said.
“Right before Alvin clocked in at 5pm, he was approached by a group of young men who were walking down 78, with at least one without a shirt. As he was getting out of his car, they were asking him about his new car (Honda Civic), and kept on asking him “how much you make”. Alvin didn’t confront them and walked to his workplace, with the group continuing to verbally harass him. He told this to his supervisors and coworkers at Publix Pharmacy and this is the only time this has happened. That’s the thing that’s bothering me right now. I’m hoping that it was just some random thing, that it was just kids being dumb and that it’s unrelated. But people must’ve definitely seen them if this happened around 5pm on 78, since the roads get busy then.”
Meanwhile, authorities are working to identify a badly decomposed body found floating in a lake in a Gwinnett County neighborhood Wednesday night.
Gwinnett County Police Department officers responded to a “suspicious activity” call on Lake Carlton (Lake Carlton Road / Bob White Lane), unincorporated Loganville, on July 18, 2018 at about 8:15 pm.  The caller noticed something floating in the water and called 911.  Fire Department personnel responded with officers and used a boat to approach the object.  They were able to confirm it was a deceased male, according to a press release issued by the Gwinnett County Police Department Thursday.
Detectives are aware of the missing person case from the Loganville Police Department concerning Alvin Ahmed.
If anyone has any information to share in this case, please contact GCPD detectives at 770-513-5300.  To remain anonymous, tipsters should contact Crime Stoppers at 404-577-TIPS (8477) or visit www.crimestoppersatlanta.org.  Crime Stoppers tipsters can receive up to $2,000 for information leading to an arrest and indictment in this case.  Case Number(s):  18-066485