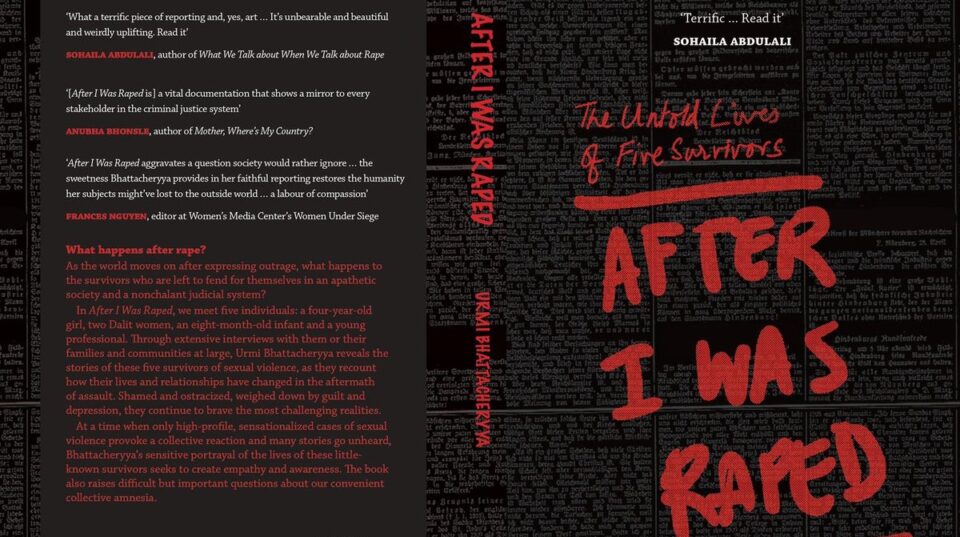 As the world moves on after expressing outrage, what happens to the rape victims who are left to fend for themselves in an apathetic society and a nonchalant judicial system?

In “After I Was Raped” (Pan MacMillan), we meet five individuals: a four-year-old girl, two Dalit women, an eight-month-old infant and a young professional. Through extensive interviews with them and their families and communities at large, author Urmi Bhattacheryya reveals the stories of these victims of sexual violence, as they recount how their lives and relationships have changed in the aftermath of assault. Shamed, ostracized and weighed down by guilt and depression, they continue to brave the most challenging realities.

This book picks up where most news reports about survivors leave off – it enters bedrooms and courtrooms, and picks up the threads of their lives today, years after their rape, and in the midst of their continuing wait for justice.

At a time when only high-profile, sensationalized cases of sexual violence provoke a public reaction and many stories go unheard, Bhattacheryya’s sensitive portrayal of the lives of these little-known victims raises difficult but important questions about our convenient collective amnesia – and their struggles for justice and dignity.

Bhattacheryya is an independent journalist based in New Delhi. She worked as Gender Editor at The Quint, reporting – almost exclusively – on women and children who have been victims of sexual violence. She currently writes for national and international media, including Boston Globe, Globe and Mail, Caravan and Women’s Media Center, on issues of sexual assault, women’s health and culture.

In 2020, Bhattacheryya won the UNFPA Laadli Award for Gender Sensitivity for her reporting on child sexual abuse.