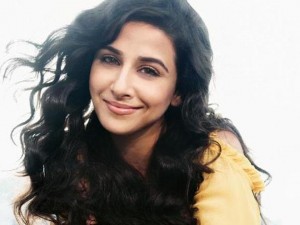 New Delhi, Oct 4 (IANS) She loves campaigning for causes, but National Award winning actress Vidya Balan has no intention of stepping out of the arclights to make it a full-time career because acting is what she lives for. Besides, she feels the country is currently “very disillusioned with politics and politicians”.

“I am very happy being an actor. If being a known face, a film star or celebrity can draw attention to a cause and get people interested in knowing more about it… I am happy. But acting is what I live for and I don’t see myself ever entering politics,” Vidya told IANS in an interview.

The 35-year-old endorses the Nirmal Bharat Abhiyan sanitation campaign and Nihar Naturals Shanti Amla, which started a ‘Chotte Kadam Pragati Ki Aur’ campaign in association with NGO Child Rights and You in September 2012. It aims to empower women to help children’s education in India.

As much as Vidya believes in the power of such campaigns, she is more comfortable doing these from outside the circle of politics.

“I think that at this point, more than ever, we are all very disillusioned with politics and politicians…so that’s not a space I want to enter at all. I am more committed to what I am doing right now,” she said.

In fact, “The Dirty Picture” star loves her acting profession so much that she never even wants to go behind the camera or handle production work a la her husband, Siddharth Roy Kapur, managing director of Studios, Disney UTV.

Vidya admits she neither understands numbers nor is she inclined towards writing for or directing films.

“I write my diary every day, but not anything else. I am too consumed with being in front of the camera. Even if I went behind the camera, I’d get frustrated… if I directed or wrote a film, I’d like to see only myself playing all the parts. I would replace all the actors and do it myself,” she said.

She is quite capable of this too – given the variety of roles that she has essayed on the big screen. She portrayed an unwed mother in “Paa”, a loud Punjabi woman in “Ghanchakkar” and a sex symbol in “The Dirty Picture” with utmost ease and conviction.

Now she is game to go bad too!

“I think there is a villain in each one as much as there is a seductress or a mother or lover or a daughter. So I’d love to play that too,” said Vidya, who will be seen with actor-filmmaker Farhan Akhtar in “Shaadi ke Side Effects” in 2014.

Having made her cinematic debut in 2005 with “Parineeta”, an adaptation of a 1914 eponymous Bengali novel, Vidya has proved her versatility film after film. Her strong presence and performance in films like “No One Killed Jessica” and “Kahaani” have made her a sought after name in Bollywood.

What she doesn’t enjoy, however, is doing remakes of films.

“I don’t think any film should be remade, especially if they are classics…unless you are able to give something new like what (filmmaker) Anurag Kashyap did with ‘Dev D’. It was a very interesting twist,” Vidya said.

“If it’s already been told beautifully on screen once, why do you want to retell it,” she questioned.

Congratulations to our Baby of the Week, Anura Atre!