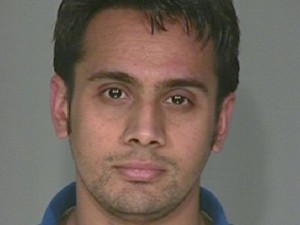 Washington: (IANS) Lakhvir Singh, 28, of Indianapolis who was convicted recently of raping and strangling the woman he wed in an arranged marriage, will serve at least 10 years in prison before likely being deported to India.

Singh, 28, told Marion Superior Court Judge Carol Orbison that he planned to appeal his conviction, but he will need a public defender appointed because he is out of money. A jury found him guilty of criminal deviate conduct, domestic battery, rape, sexual battery and strangulation.

Orbison imposed a sentence of 25 years, with the last five to be served in community corrections. However, both defense attorney Jack Crawford and Marion County Deputy Prosecutor Cindy Oetjen said practically, that translates to a 20-year sentence. Assuming Singh has no trouble in prison, he likely would serve half of that.

“I want the maximum punishment and justice to be served,” the woman said in a statement to the newspaper which did not identify her. “I don’t want this to happen to any other girl. My voice can finally be heard.”

The woman, who was married off when she came to Indiana to visit her family, was allegedly raped by her husband and forced to do nearly round-the-clock household labor, the newspaper said citing police.

She was routinely referred to as “bitch” by her husband, uncle and aunt. She was slapped and choked. Her life was threatened. She barely ate and had to sleep on the floor without covers.

Singh’s lawyer, Jack Crawford, however, claimed the woman made up the allegations to get out of a marriage she didn’t like and to secure a visa for victims of human trafficking.

“She was in a marriage where she did some things she didn’t want to do and tried to get out of it,” Crawford was quoted as saying. “The blame here lies with the parents for forcing them both into a marriage they did not want.

And, both attorneys agreed, federal immigration officials probably will deport him as soon as he leaves prison and before he begins community corrections.

Singh showed little emotion in court, but his current wife, Harpeet Kaur, tearfully described him as a wonderful husband and father who never was violent or abusive. They married in December 2010, she said, and have an 18-month-old son who is intensely bonded to Singh. After the hearing, she sobbed in the arms of family members.

Crawford said after the hearing that Singh and Kaur married after Singh’s relationship with the victim ended.