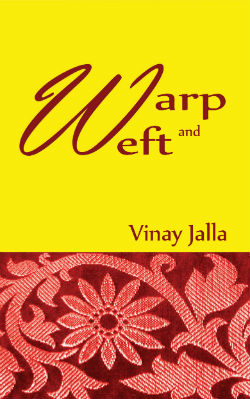 “God made Man. Man made Money. Money made Man Mad” an elusive character Gagoopa sermons protagonist Narayana. The quote essentially embodies the essence of Warp and Weft.  Vinay Jalla weaves his novel with tender love and care, treading us through the rustic lanes of the fictitious Zarivaram, reconnoitering the life and times of its inhabitants, at its raw and rustic best.

Much reminiscent of R.K. Narayan’s Malgudi, Zarivaram houses many characters including protagonist Narayana. In fact, we get to learn about the unfortunate conditions under which Narayana comes into the world. Reflective of some of real life weaver’s conditions, which are nowhere near silky, Jalla’s characters are soaking in poverty barely making ends meet.  The stories and characters are familiar – liquor and its ugly repercussions on already deprived families, the oppressed wives Nagalamma and Gowramma who bear the burden with no opposition, the landlords and affluent who live on an aptly titled “” Street, separating them not just on a physical grounds, but something much deeper, all woven to silky –smooth perfection.

Jalla’s Narayana is raised by a neighbor after his mother dies at childbirth. His father, already a drunkard, way wards into self-destruction. Amidst utter dismay, Narayana manages to find his share of happiness with friends Iqbal and Ramu. They build a world of their own, be it playing marbles, knocking off tops or flying kites. But then nature strikes and Zarivaram is barren with no rain in sight. The drought’s fury consumes many including his own aunt who had adopted him. Narayana learns to barely survive, the hard way. But that is not what he wants. Humiliation, helplessness and the weather as harsh as people eventually followed by his meeting with the mysterious Gagoopa lead him to promise to himself that he will be the rich and he will do it the right way, by working earnestly. Narayana’s quest to overcome overwhelming conditions forms the rest of the narrative.

Even though we follow Narayana’s story throughout, credit goes to Jalla for intertwining many lives and their tales in a narrative so earthy, I could almost smell and feel the soil. Having spent most of my summer vacations in the village as a kid, I can relate to climbing of mango trees and relishing them with salt, or simply being part of nature at its organic best. Therein lies the strength of the novel – unassuming and unpretentious the story unfolds at a gradual pace, building Narayana’s character and the circumstances around him naturally.

Warp and Weft has a laid back narrative; Jalla is in no hurry to get to the conclusion, which truly makes it a good scrumptious read, delving into details, be it the nitty gritty of flying a kite or intrinsic art of weaving sarees. The approach to Jalla’s storytelling is simplistic yet substantial. Narayan’s character is also strong willed despite his depravity. He holds on to his morals, even when it would have been easy and justifiable to give in to temptation, as he does when he refuses to take tips from vendors as a loader of sarees in Bangalore. He wants to build good will, and not in the mood for instant gratification. In today’s times where everyone wants to get everywhere in a NY minute, Warp and Weft weaves a restrained, robust and reflective tale of what lies beneath those gorgeous sarees displayed at the showrooms. If you are in the mood for a fast paced thriller, this is certainly not your first choice. If you however want to get back to your roots, refresh your childhood memories, especially f you grew up in or around villages, this certainly makes for a silky read.