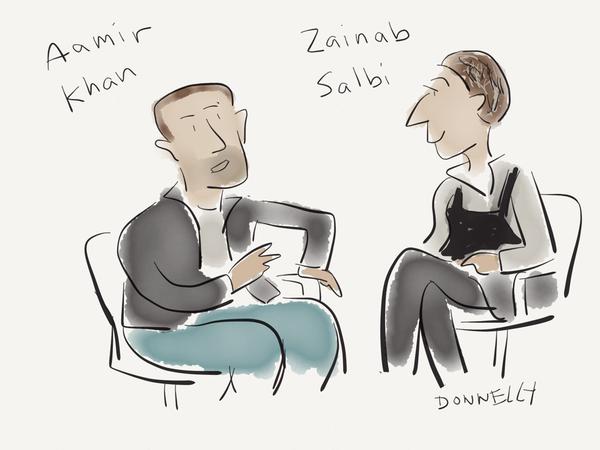 New York, April 23 (IANS) Superstar Aamir Khan discussed India’s social evils like female feticide, gender inequality and honor killing at the Women in the World Summit here, saying change can be brought by reaching out to people with love and affection.

He also cited the need to leave behind the common perception of “real men don’t cry”, and finding a new definition of masculinity.

The actor spoke about his crusade for women’s rights and justice at the opening night of the sixth annual Women in the World Summit here on Wednesday during a conversation with Iraqi-American humanitarian Zainab Salbi, reports nytimes.com.

The 50-year-old actor, who has earned Bollywood’s ‘Mr. Perfectionist’ tag due to his films like “Lagaan”, “Rang De Basanti”, “Fanaa”, “Ghajini”, “3 Idiots” and “PK”, took up the role of social crusader with his TV show “Satyamev Jayate”.

With the show, the actor shifted the public’s attention to meaningful conversations to help induce social change in India.

“Every day you read about injustice, poverty, and you really want to do something, and I realised I should do what I know best, which is storytelling, to enrich discussion on the issues we face as a society,” he said.

Talking about female foeticide, a topic picked by the show, he said: “It’s a huge problem in India and connects with people on a gut level,” adding that analysis prove that “people are reacting to it”.

When it comes to issues like dowry, the actor explained that themes of such a sensitive nature need to be communicated with love.

“In India 90 to 95 per cent of people have either given or taken dowries, and when you are conveying to a majority that what they are doing is not right, it has to be done with love. Only through that you can effect change,” he said.

Aamir tackled other highly sensitive issues, including honour killings and caste as well.

“People are very touchy and emotional about certain complicated issues,” the actor said, referring to the topic of Dalits in India.

Masculinity also made an engrossing topic at the session.

“Unless we redefine what it is to be a man, things aren’t going to change. Is a real man a protector or someone who goes and beats people up? You cannot raise a boy telling him not to cry. You are in effect distancing him from emotion and then you are surprised when he grows up and beats his wife.

“In India, the conventional wisdom is that ‘real men don’t cry and real men, don’t hold their wives hands’,” said Aamir, who also pointed out an irony as he is seen shedding tears in most episodes of his TV show.

He mentions that he “cries all the time, not only on all show’s episodes, but also when he is researching for it”.

Aamir also talked about the ban on the film “India’s Daughter”, a film about the Delhi gang rape case of 2012, which led to a big controversy.

He said that he hadn’t personally seen the film, but thought it was unfortunate that it had been banned.

“The balance of power in India needs to change. Unless conviction becomes swift, certain things are not going to change and as a society we have to shun the rapist and hold the survivor close,” he said.