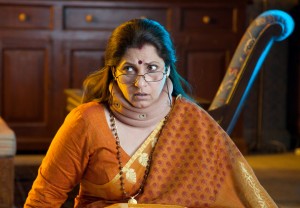 Mumbai, Dec 6 (IANS) Dimple Kapadia is certainly not a one film wonder, but the National Award winning actress says her secret of survival in the industry is “Bobby”, a film that released four decades ago but is still fresh in the minds of the people. Even today she is reaping the benefits of its success.

Directed by Raj Kapoor, “Bobby” was Dimple and Rishi Kapoor’s launchpad and it created wonders at the box office when it premiered in 1973. Soon after the success of the film, she quit the industry for a fairytale wedding with the then superstar Rajesh Khanna.

But 13 years later, after parting from Rajesh Khanna – who died in 2012 – she returned for a successful innings in filmdom with triangular love story “Saagar” and proved her mettle with an eclectic mix of commercial and parallel cinema – “Aitbaar”, “Arjun”, “Rama Lakhan”, “Batwara”, “Kaash”, “Rudaali” and “Lekin”.

But she feels “Bobby” was her ultimate success.

“Till today I am eating from ‘Bobby’ only. None of my other films was such a hit. It is only ‘Bobby’ that has given me so much for 40 years. It is so strong that I am still standing on that soil,” Dimple, who won the Filmfare Best Actress award for “Bobby”, told IANS in a group interview while promoting her new film “What The Fish”.

Her comeback was no ordinary affair. The 56-year-old was a game-changer and managed to make a mark in an industry where being married and with two daughters has a negative connotation.

She feels that audiences are the least bothered about the marital status of actors – it is the industry that suffers from the marriage syndrome.

“I made a comeback as a married woman with two children (daughters Twinkle and Rinke). So it’s not the audience who rejects them, it is what people believe in the industry. And I think I proved them totally wrong,” she said.

“If the audience likes your work, if they like you, they don’t think whether you are married or have children or not. I made that quite clear.

“Even men used to hide their marriages because they used to feel people will not like them any more. It’s the industry which has the false notion that an actor or an actress, if married, is not desirable to the audience,” she added.

Looking back at her journey, Dimple said: “I am happy that I have my own phase and I enjoyed my life.”

“It’s not just about the films, it’s also about living my life. For me, filming is always like delivery pains. My family makes fun of me and they say, ‘What do you have to prove now, just go and enjoy yourself’.”

When it comes to fun, Dimple is very good at comedy off screen, but is unable to have the same effect in front of the camera.

She said: “I am very clumsy and fumbling. I talk rubbish and nonsense. My kids say, ‘Maa you should be in a comedy film’. Even my son-in-law (Bollywood action star Akshay Kumar who is married to her elder daughter and actress Twinkle) says this. And I am like you are right, but when I am in front of the camera, I can’t pull it off.

“I am very good at comedy off screen. I wish I could translate it so that you could get to see how mad I am. I enjoy doing different roles,” she said.

Dimple will be seen trying her hand at comedy in her forthcoming film “What The Fish”, a fun-filled mysterious drama revolving around a 60-plus grumpy woman she plays.

She has stepped out of her comfort zone to promote “What The Fish”, but confesses to not understanding marketing gimmicks at all.

She said: “I don’t understand it. I don’t believe in it, because I think as an audience, I decide after watching the promo whether I want to watch the film or not.”

“But I guess times have changed. Obviously, the results are good that is why producers are doing this. I am sure they are getting returns because of this,” she added.