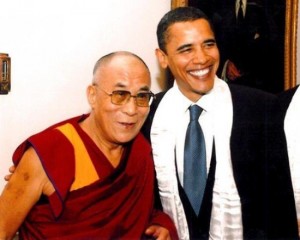 When President Barack Obama meets the Dalai Lama in the White House on Friday morning, a jaded diplomatic dance will play out.

The meeting is being hosted in the Map Room of the White House instead of the Oval Office in a somewhat laughably symbolic scaling down of its perceived importance. It is a meaningless gesture of accommodation that successive US presidents have made keeping in view Chinese sensitivities.

Normally, only visiting heads of states and other important dignitaries are met with in the Oval Office. The Dalai Lama has traditionally been received in the Map Room, which in the diplomatic scheme of things is just another room in the White House as opposed to the Oval Office which is in the West Wing and the center of everything in Washington. The Map Room is on the ground floor where maps were consulted by President Franklin Roosevelt during the Second World War. Many other events have taken place there.

This will be the Dalai Lama’s third meeting with President Obama, the first two having taken place in February, 2010 and July, 2011. Like the previous two meetings, this too is expected to be high on the optics and rather inconsequential in terms of making any impression on Beijing to directly engage the Dalai Lama.

The traditional wisdom of such a meeting is to read a possible US rebuke of China for its human rights record and other contentious issues. Entering the mix this time are territorial tensions in the East China Sea. As the Obama administration continues to strengthen its strategic presence in the region, the meeting with the Dalai Lama might come in handy, albeit purely for its optics.

There has been no change in the US position that Tibet is part of China. National Security Council spokeswoman Caitlin Hayden, who announced the meeting, said Washington supported the Dalai Lama’s approach but recognized Tibet to be “a part of the People’s Republic of China”.

“We do not support Tibetan independence,” Hayden said.

“The president will meet the Dalai Lama in his capacity as an internationally respected religious and cultural leader,” she said.

“The United States strongly supports human rights and religious freedom in China. We are concerned about continuing tensions and the deteriorating human rights situation in Tibetan areas of China.”

The Obama administration is expected to lay fresh emphasis on the need for Beijing to hold direct talks with the Dalai Lama without conditions.

While all this sounds encouraging to someone just becoming familiar with the issues, those who follow the Sino-Tibetan dispute and the US position on it, all this is almost comically routine and so far without any consequence at all. Four years ago, President Obama, still fresh from his historic triumph in the presidential election barely a year prior, meeting the Dalai Lama might have had more than a symbolic value. However, as the passage of four years has shown, there has been absolutely no progress in the Sino-Tibetan dispute. If anything, in the past three years or so things have become much worse with more than 120 Tibetans immolating themselves to protest the ever constricting freedoms in Tibet.

It is a good thing that as a Buddhist master, the Dalai Lama has two main attributes – a sense of enlightened detachment and acute consciousness about impermanence of everything in the universe. Without those two, he might have gone expecting some recognizable outcome from his meeting with the US president.

China is expected to react to the meeting like it always does – with unconcealed contempt and almost contrived anger. A senior Chinese official was quoted by Reuters as saying that foreign leaders who meet the Dalai Lama should “pay a price for it.” These are words which are repackaged every time Beijing thinks Washington is engaging the Dalai Lama in ways it disapproves of. They do not really lead to any identifiable consequences in US-China relations.

It makes no sense for the US president not to receive the Dalai Lama in the Oval Office because in the overall scheme of things it would make no material difference to China where the Tibetan leader is actually hosted. Meeting him in the Map Room is neither fooling the Chinese nor making them appreciative of America’s gesture in being mindful of their sensitivities. No matter how one looks at it this is nothing more than vestigial diplomatic thinking which no one is willing to give up.

(21-02-2014- Mayank Chhaya is a journalist and biographer of the Dalai Lama based in Chicago. The views expressed are personal. He can be contacted at m@mayankchhaya.net)

India’s vaccine diplomacy fails, China cashes in on it