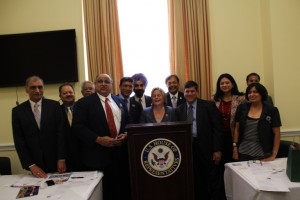 Rep. Judy Chu addresses the Symposium, while AAPI leaders stand around her during the first ever AAPI Symposium on Healthcare Reform

Washington, DC: The nation is engaged on a heated discussion about the implementation of the Affordable Care Act, which is about a week away from the rollout of key portions of the law, even as the debate on comprehensive legislation on immigration reforms has taken center stage.

It’s in this context, American Association of Physicians of Indian Origin (AAPI), the largest ethnic group of physicians in the United States, representing nearly 100,000 physicians of Indian origin, with the objective of making its voice heard on Capitol Hill, held its first ever healthcare symposium at the Rayburn Congress Office Building on Capitol Hill, Washington, DC on Wednesday, September 18th, 2013.

Twenty US lawmakers addressed AAPI delegates who had come from across the nation, pledging support to AAPI’s legislative agenda, especially: Clearing the backlog of Green Cards for skilled workers; Reforming the H-1B, J-1 and F-1 visas; And Expansion of STEM (Science Technology Math Engineering) to include Physicians. 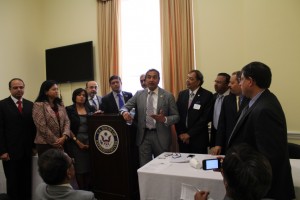 In addition, during individual meeting by API leaders with several Congressmen in their Chambers, they sought support for AAPI’s agenda. “Since we’re all here on Capitol Hill, don’t forget to meet your Congressman,” Dr.  Jayesh Shah, president of AAPI, urged his colleagues. “We’re here to tell them what we think, as a body. It makes a lot of difference when they hear directly from their constituents, so please do not be afraid to approach them.”

According to Dr. Shah, Indian-Americans constitute less than one percent of the country’s population, but they account for nearly nine percent of the American doctors and physicians, having a very powerful presence across the nation, having one out of seven doctors serving in the US are of Indian heritage. They provide medical care to over 40 million of US population in the US. “We gather here today primarily to advocate for comprehensive Immigration bill which will help our physicians, increase GME positions by 15,000 and be part of health care reform debate,” Dr. Shah stated.

“The only way to address this future crisis is to increase the number of residency positions available for future physicians to get trained, so that our nation can effectively manage the need for increased patient care. Increasing the size of medical school classes is not enough,” Dr. Harbhajan Ajrawat, Chair of AAPI Legislative Affairs Committee, said,”

Rep. Ed Royce (R-CA), Chairman, House Foreign Affairs Committee, who was the inaugural speaker at the Symposium on immigration and healthcare reforms, stressed the importance of the relationship between patient and physician, while acknowledging that the United States has maximum lawsuits filed against physicians among all the countries of the world. He pledged support for the limited Liability Reforms Act.  Royce along with several other lawmakers agreed with AAPI that having an AAPI member on healthcare reform bill would bring a unique perspective to the Bill.

Sen. Jim De Mint, who is currently leading the Heritage Foundation, told the physicians, “I laud your contributions to the health of this nation.” However, he added, “Centralizing payment system does not help in healthcare. The idea that government can find solutions to healthcare issues does not contribute to better health care. We want to make it better. Liability needs to be controlled. We need to honor those who came here legally. Amnesty to illegal is a disgrace to those who came legally.”

Showering praises on them for their commitment, professionalism and skills in their care for the patients of this nation in various capacities and regions, lawmakers from both the parties pledged their support to the legislative agenda of AAPI.  Some of them recounted personal stories of their association with physicians of Indian origin, while others referred to them and their family members being treated by the highly talented and committed Indian American physicians. Some of them promised to bring in new legislation or amendments to the existing legislations incorporating the concerns expressed by AAPI members.

“You have dedicated your lives, skills and talents at the service of the needy in this country. And You excel in your fields and have a passion to provide quality care,” Rep. Frank Pallone of New Jersey told the delegates. Congressman Phil Gingrey, MD (R-GA), said, “My 95 yr-old-mom, my wife and children are being treated by physicians of Indian origin. You do a great job.”

Congressman Jim McDermott, MD (D-WA), who has visited India more than any other member of Congress and is a past co-chair of the Congressional Caucus on India and Indian Americans, pledged to take up the concerns of AAPI members in the US Congress.

Rep. Joe Wilson narrated a personal story of his son graduating with a medical degree recently. “How hardworking and enterprising are Indian Americans,” he said. He went on to praise the contributions of NRIs in almost all fields of American life.

“75 % Indians have college degrees. that’s an economic benefit. Immigration is good for the economy. For instance, the value of Asian Americans’ purchasing power in the country is $2 Trillion,” Alex Nowrasteh, an immigration policy analyst at the Cato Institute, said.

Suhail Khan, Esquire, Director of External Affairs at Microsoft Corporation presented a Microsoft perspective on immigration. Nearly 8,000 jobs at Microsoft go unfilled each year, he said. Inviting talented people from around the world helps in generating opportunities for many others in the nation to find suitable jobs, he said.

Rep. Joe Crowley pointed to the crowning of Nina Davuluri as Miss America as it represents the coming of age of the Indian community in the US. Describing it to be the “full integration into the culture and mosaic of USA,” Crowley pledged unqualified support to India’s bid for Permanent Membership to the UN Security Council.

Rep. Frank Pallone agreed with AAPI members on every issue they had presented. However, he admitted that lack of cooperation and partisanship in the House has prevented the Congress from enacting any of these into law, but promised to work on bringing them into the House for approval.

Rep. Steny Hoyer stressed the importance of AAPI taking on this mantle of letting the Congressmen know of their concerns. “It’s very critical that you are able to voice your concerns and needs in order for us to understand and address them,” he said.

Rep. Ami Bera told AAPI members, “I am one of you. First and foremost, I am a physician,” he said. Dr. Narendra Kumar, who had introduced him to the audience said, “We need many more Ami Beras to represent the interests of AAPI and the larger Indian American community.”

Earlier, setting the tone for the day’s events, and while complementing his colleagues for their contributions in the fields of medicine and healthcare in the past six decades in the US, Dr. Shah said, “We’ve gathered here today to advocate for immigration, and to be part of healthcare reform. Caring for 1 in 7 pts in the nation, working in very challenging situations, gives us a unique place in the process of healthcare reform, providing us the right to be at the table to make decisions on health related issues.”

Stating that the US is currently experiencing a physician shortage, which will be exacerbated by retiring baby boomers, affecting thousands of patients’ access to a physician, and ultimately the health care they need, Dr. Ravi Jahagirdar, President-Elect of AAPI, said. “Physicians graduating from accredited U.S. residency programs should also receive similar treatment. Such a proposal would enable more physicians to be eligible for Green Cards and address the ongoing physician shortage.” he added.

Among the areas where AAPI had sought US lawmakers to support their agenda included increasing 15,000 more Residency Positions. Dr. Kavita Gupta, Secretary of AAPI, wanted the US Congress “to increase the size of entering Medical School classes, as it pertains to health care reform, as more physicians will be needed to provide quality health care to our nation’s uninsured patients.” While pointing to the fact that from 1980-2005, medical school enrollment remained flat, the  US population increased by more than 70 million people, requiring 90,000 more physicians by 2020,  Dr. Vikas Khurana, Treasurer of AAPI, pointed out.

AAPI supports limited liability reform at the Federal and State level that places effective caps on non-economic damages, limits the use of joint-and-several liability, provides physicians with flexibility to negotiate settlements with medical insurers and limits the statute of limitations for filing medical malpractice claims, Dr. Jayesh Shah, added.

AAPI is a forum to facilitate and enable Indian American Physicians to excel in patient care, teaching and research and to pursue their aspirations in professional and community affairs. For more details on AAPI’s first ever Capitol Hill Health Care Symposium to be held on September 18th,   please visit: http://www.aapiusa.org/calendar/event/343.aspx

Congratulations to our Baby of the Week, Ayaan Mittal!