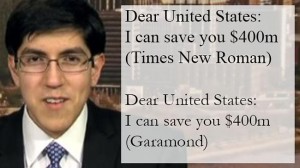 Washington, April 1 (IANS) An Indian-American student’s bold suggestion to the US government that it could save $136 million a year by simply switching fonts from Times New Roman to Garamond in government printing has caught national attention, with printing officials terming his work as “remarkable” while others dismissed it saying he was too young to understand the “oddity” of font measurement.

Suvir Mirchandani, a 14-year-old middle-school student, came up with the suggestion after analysing ink use for a school project and then expanding his research to government, which spends a whopping $1.8 billion annually on printing.

“Mirchandani is only 14, so he can be excused for not understanding this weirdo oddity of the way fonts are measured, but the biggest issue with his argument is that he measured Garamond at the wrong size!” says a feature in Fastcodesign.com.

Citing blogger Thomas Phinney, a font enthusiast with an MS in printing, it comes to the conclusion that using less ink might cost the government slightly less money, but it’s not going to come from switching to Garamond.

“Garamond’s letters are smaller at the same height as other fonts, making it less legible at the same size when printed out,” it said.

“And even if the government did switch to a font that maintained legibility at the same size as Times New Roman while using less ink, the government would likely not save much money by switching to it,” Fastcodesign.com said.

For Suvir, it all started as a science fair project when as a sixth-grader at Dorseyville Middle School in Pittsburgh, Pennsylvania, he decided to figure out a way to reduce the use of paper and ink, according to CNN.

“Ink is two times more expensive than French perfume by volume,” Suvir was quoted as saying with a chuckle.

He’s right, said CNN noting Chanel No. 5 perfume costs $38 per ounce, while the equivalent amount of Hewlett-Packard printer ink can cost up to $75.

From his analysis, Suvir figured out that by using Garamond with its thinner strokes, his school district could reduce its ink consumption by 24 percent, and in turn save as much as $21,000 annually.

Using the General Services Administration’s estimated annual cost of ink – $467 million – Suvir concluded that if the federal government used Garamond exclusively it could save nearly 30 percent, or $136 million per year.

Any way, the US government is in no hurry to follow up on Suvir’s suggestion. According to CNN, Gary Somerset, media and public relations manager at the Government Printing Office, described Suvir’s work as “remarkable”.

But he was noncommittal on whether the GPO would introduce changes to typeface, saying the GPO’s efforts to become more environmentally sustainable were focused on shifting content to the Web, it said.