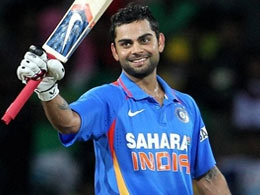 Adelaide, Feb 15 (IANS) India’s match-winner against Pakistan during Sunday’s Pool B World Cup game here, Virat Kohli said the victory is “one of the biggest” wins in his career as the defending champions beat their traditional rivals by 76 runs.

A special century by vice-captain Kohli (107), Shikhar Dhawan’s 73 and Suresh Raina’s 74 guided India to 300/7 which Pakistan failed to chase down, being bowled out for 224 in 47 overs at the Adelaide Oval. Kohli scored his 22nd One-Day International (ODI) century.

“Probably one of the biggest (win) in my career so far,” said Kohli at the post-match presentation ceremony here Sunday.

“Amazing way to begin our World Cup with a win under our belt, but they did put up a strong fight.”

Asked how he felt being hailed as the new Sachin Tendulkar of the Indian batting line up, Kohli was left awestruck for a moment only to mutter: “Expectations are going to be there when you do well for your country. I just look to stand up to them because I hate losing games and play passionately. I like the burden of expectations.”

The 26-year-old added that his role in the team is to play as a sheet-anchor so that the other batsmen can bat around him freely knowing that one end is secure.

“My role in the team is to bat through, and the power-hitters can play around knowing that one end is secure. The way Shikhar (Dhawan) and Suresh (Raina) batted today is commendable. The support has been magnificent. We expect the same throughout the tournament.”