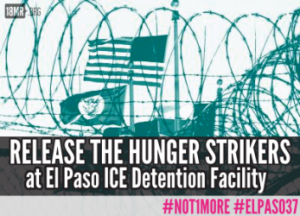 Washington, April 22 (IANS) An Indian-American community organisation has sought the intervention of US lawmakers for securing the release of about 100 Punjabi youths detained by US immigration authorities in Texas for entering the US illegally.

Only 37 of the detainees at US Immigration and Customs Enforcement’s (ICE) El Paso Processing Centre in Texas had gone on a hunger strike earlier
this month, but all of them have since called off their protest at its intervention, North American Punjabi Association (NAPA) stated Monday.

The youths were arrested while crossing the US Border illegally at different times between January and November 2013, Satnam Singh Chahal, executive director of the Milpitas, California based organisation said in an email.

Chahal has also written to several law makers including Democrat House members John Garamendi and Mike Honda and Democrat Senator Barbara Boxer seeking their intervention to get the detainees released on “parole or on bonds as soon as possible.”

Chahal said all of the detainees “are said to be members of a minority political party in Punjab who fled India because they are said to have fear to their lives.”

ICE is legally bound to release these detainees as soon as they have proven their true identities and reasons for entering US, he wrote.

NAPA, he said has a complete list of 47 detainees along with their alien numbers and was trying to get information about other detainees also.

One striking detainee who was admitted in an outside hospital is back in the prison and he is doing well, Chahal said.

There is no tension between Jail authorities and detainees and they are getting the food to their satisfaction, he said clarifying reports about their conditions.

Chahal said NAPA was helping the detained youth on humanitarian grounds as they had paid lot of money to agents after selling their properties to come to the US.

Adi Yogi – The Beginning of Yoga