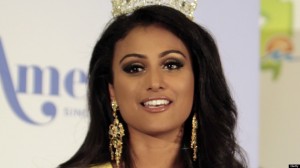 Washington, April 22 (IANS) The first ever Indian-American Miss America, Nina Davuluri, has come to the defense of a teen who asked her to a dance as the news of his suspension for the stunt reached the White House.

Davuluri, who was one of the readers on the storytime stage at the annual White House Easter Egg Roll Monday tweeted after the event that she had “thought for days” about what to say to First Lady Michelle Obama. But it was Obama who led with “So I hear you got some kid suspended,” according to Davuluri’s tweet as cited by York Dispatch.

Earlier Saturday Davuluri asked a Pennsylvania high school to reconsider a decision to suspend Patrick Farves for three and a half days for asking Miss America to the prom, the annual end of the year dance for high school students.

While she could not attend the prom because of her schedule, she was flattered by 18-year-old Farves’ request and has contacted the school about reversing the decision, she wrote on the Miss America Organization’s Facebook page.

“On Thursday, a student invited me to prom and gave me a flower while I was giving a presentation in York, Pennsylvania.

“I was flattered by the gesture although I am unfortunately unable to attend due to my travel schedule. I later learned of the disciplinary action taken and reached out to the school in hopes that they will reconsider their decision.

“Meeting and interacting with students across the country has been an important and rewarding part of my year as Miss America.

“I always encourage students to follow their dreams through education, and I’m inspired daily by the enthusiasm and aspirations of the bright young adults I have the pleasure of meeting through my travels,” Davuluri wrote.

Meanwhile, York dispatch reported that Farves doesn’t consider his prom proposal to Davuluri in front of the entire student body during a Thursday assembly rejected, even though he never got a “yes.”

“For the sake of my ego, I’m going to say no, I never got a direct answer,” the senior at Central York High School was quoted as saying.

According to the Dispatch, the proposal started as a joke a few days before Davuluri showed up at the high school, when Farves suggested he’d pop the question during the assembly.

His classmates firmly approved, and it spread like “wildfire” around the school, he said. And the more he thought about it, the more he needed to ask.

Davuluri was at Central York High School during the day Thursday to talk with students about diversity and the importance of science, technology, engineering and mathematics, or STEM, studies.

Farves as cited by the Dispatch said it wasn’t his intention to be disrespectful to Davuluri, either.

He passed along an apology to Miss America through a few people backstage with her during the assembly, who reported she thought it was “cute.”