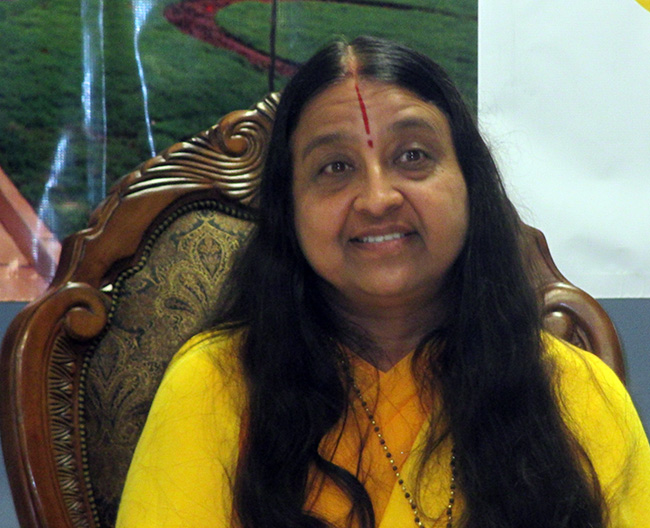 Atlanta, GA: Siddheshvari Devi Ji (Didi Ji) the founder of Yugal Kunj, took questions from the local media on the first day of the inaugural ceremony. She talked about her spiritual journey, the need for a God-realized guru and her vision for Yugal Kunj.

Didi Ji graduated from York University in Toronto with an Honors degree in Linguistics. After graduation, Didi Ji’s spiritual quest led her to Jagadguru Shri Kripalu Ji Maharaj. Didi Ji spent two years in Bhakti Dham Ashram and learned directly from Shri Maharaj Ji the intricate mysteries of the Vedas and other scriptures. Since 1987, she has been preaching his message to the west.

Some excerpts from her conversation with the local media.

Her personal journey.
I did not come from a religious family. But I gravitated towards temples from a young age. I had felt that the aim of us humans cannot be just to eat, sleep and have children. There had to be a purpose. Even as a teenager, as I moved from one country to another, the search for meaning continued. I became desperate to know the meaning of life. Since the material world was not satisfying me, I thought, perhaps God would. I went to the temples in Toronto, but realized that one needs a Guru (to explain the meaning of life). But I did not know how to find one. I pleaded helplessness before God. “Find me a guru,” I said. “And by the way, could you find me the best one?”

That’s when Jagadguru Shri Kripalu Ji Maharaj entered my life. I was naturally attracted to his teachings. He gave me the sewa of preaching. Now, my parents and others who knew me from that time would have thought it impossible for someone with such a shy and introverted nature to preach. But I had full faith in my guru. I started preaching in 1987.

The need for a guru.
The guru is the teacher. Just as we need a teacher to learn math, English, dance, music; we need to be guided by a teacher to know the self; to know God. The guru is at the highest level. He knows God inside out. A guru is not someone who has just read scriptures, but has been given the knowledge internally by surrendering to God. People think of themselves as being Hindu or Indian or Gujarati, but the guru says, “You are the soul with no nationality, no skin color, no body.”

We need a God-realized soul as guru, not just a self-realized soul. How do you know when you have found a God-realized guru? Be a genuine seeker, and God will send you the guru. You feel it in your heart and blood. The guru’s philosophy and teachings will answer the questions you’ve had about God (and the meaning of life). When you do sadhana, the worldliness goes down, and you become a better person.

My guru took a worldly person and put the love of God in me. To me, that is the greatest miracle. When I first met him (Kripalu Ji Maharaj), there was instant recognition. That was the intensity of his spiritual powers. Yet, there was internal turmoil. The thought that I had to live by his plans made me miserable and I had decided to leave the ashram the next day. The next morning, I went to the prayer hall, and when he came in, he gave me a passing glance, and within that fraction of a moment, my turmoil dissipated. Of course, I was not going anywhere. Such was his power.

Yugal Kunj and its causes.
Our guru has taught us to be charitable. We are engaged in several humanitarian activities in India that include hospitals and award winning schools. Now that we have a place of our own in Atlanta, we will be in a position to get involved in local charities.

Yugal Kunj will also play a big role in dispelling myths about Hinduism through inter-faith dialogues. We have lectures and workshops. We have youth camps where stories and the philosophy behind them are taught.

On unity among temples.
I think it is wonderful that we have so many temples. It doesn’t mean we are not unified. We humans have our individual likes and dislikes. I fell in love with Krishna, but do not think any less of Ram or Shankar. But we get that it is one God’s may forms. It is in our blood. A pastor in Oklahoma once invited me to dinner. I told him it was wonderful to see so many churches in his neighborhood. It said it wasn’t so wonderful. There were 25-30 different denominations and one Jesus. Considering the different forms of God we worship, there aren’t that many temples.

Radhe<3Radhe DidiJi I love the way you found your life path and such a rare Grace of life! Sri MaharajJi is One like no other in this world… our fortunes are too many to count in His care. Thank you <3