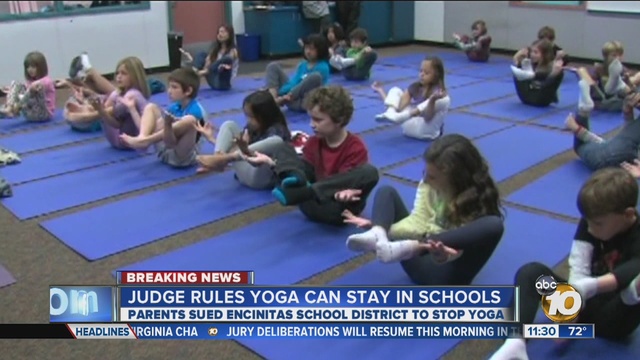 Washington, April 4 (IANS) Ruling that yoga taught in elementary schools is not a gateway to Hinduism and does not violate religious freedoms, a California appeals court has allowed it to continue.

“We conclude that the program is secular. (and) does not have the primary effect of advancing or inhibiting religion, and does not excessively entangle the school district in religion,” the three-member appeals court ruled Friday.

The school had been sued by parents who argued the school yoga program was inherently spiritual and therefore unconstitutional.

Attorney Dean Broyles, who represented the parents in the lawsuit, was quoted as saying he and his clients “are disappointed with the decision and we are carefully considering our options.”

“No other court in the past 50 years has allowed public schools to lead children in formal religious rituals like the Hindu liturgy of praying to, bowing to, and worshipping the sun god,” Broyles said in an email to U-T San Diego.

Yoga has been a health and wellness activity in the school district since 2012, when the Encinitas-based Sonima Foundation gave the district $2 million to add yoga to all physical education classes.

Broyles sued the district on behalf of a couple and their two children, saying the program violated the separation of church and state by endorsing Hindu religious beliefs promoted in Ashtanga yoga.

The state Superior Court sided with the district in 2013, finding that the school program had been stripped of religious overtones, utsandiego.com said.

The trial court noted in its decision that the district’s yoga classes “consist of instruction in performing yoga poses, breathing, and relaxation, combined with lessons in positive character traits, such as respect and empathy.”

All students in the district, which includes kindergarten through sixth-grade, get two yoga classes of 30 minutes or more per week.

“We are seeing tremendous results,” Baird said. “Kids are more flexible, stronger, and have more ability to focus. We think this is a key to the 21st century.”

Baird said he was surprised at the flap over the lawsuit as “Yoga has become ubiquitous in the United States.”

“The argument that it turns somebody into a Hindu is a stretch.”