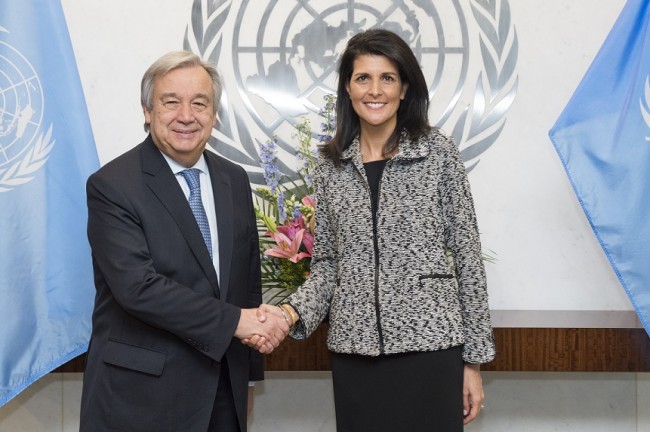 United Nations, Jan 27 (IANS) Nikki Haley formally took over as United States Ambassador to the UN on Friday with a tough message from the US of “new strength” and “new vision” and a warning about doing away with “anything that is not working.”

She also had a message for US allies and other nations. “Those who don’t have our backs,” can expect a response from the Washington.”

The first Indian American to hold the cabinet-level position, Haley presented her credentials to Secretary-General Antonio Guterres as an air of uncertainty hung over the future of relations between the global organisation and the world power that pays 25 percent of its budget.

She will be the second person of the Indian diaspora currently representing a nation other than India at the UN. Mauritius’s Permanent Representative is Jagdish Dharamchand Koonjul.

There have been many diaspora Indian representing their countries at the UN in the past, incuding Assissi Chullikatt, who was Vatican’s ambassador till 2014.

Currently scores of people of Indian origin serve in UN missions of countries from around the world.

Speaking to reporters before she went to present her credentials, Haley spelled out how her mission would fit in with US President Donald Trump’s tough worldview. “We value the UN and the way we show value is to show our strength, our voice,” she said.

Haley who had been the South Carolina governor and had no previous experience in diplomacy or foreign relations, that she would bring “fresh eyes” to the UN.

Amid calls by Trump to cut contributions to international organisations – a move backed by a majority in the US Congress, especially when it comes to the UN, she said: “This administration is prepared to have me go in, look at the UN.”

She added that she would want do away with anything that is not working.

During the Senate Foreign Relations Committee hearings earlier this month, Haley had said that she would seek reforms at the UN, especially in the peacekeeping operations. She said that she was against a “slash and burn” and would prefer targeted cuts to specific agencies like the Human Rights Council.

With a new Secretary-General starting at the UN this month, his spokesperson Stephane Dujarric said on Thursday: “The UN and United States are in a period of transition” and that Guterres looked forward to “beginning a solid and meaningful dialogue with the incoming US Administration.”

“The United States has been engaged with the United Nations, regardless of who has (or) Awhich party has had the upper hand in Washington,” he added.