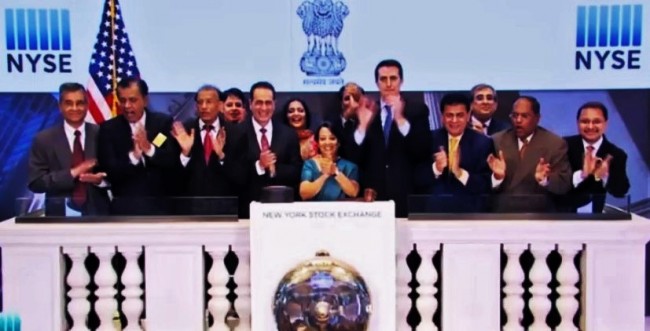 India’s Consul General Riva Ganguly Das rings the closing bell at the New York Stock Exchange in celebration of the Republic Day on Thursday, Jan. 26, 2017. NYSE President Thomas Farley is next to her at right. The Dow Jones Industrial Average closed at 2,100.91, up 32.40 points for the day. (Photo credit: NYSE/via IANS)

With the President of the exchange, Thomas Farley, standing next to her and Indian and American business and community leaders gathered around them on the balcony overlooking the trading floor, Das brought the day’s trading to a close by banging the gavel after sounding the bell.

Thursday was a day of celebration at the exchange because its bellweather index, the Dow Jones Industrial Average (DJIA), held on to and added to the elusive milestone of 20,000, which it had crossed a day earlier in a rally that took off after the election of Donald Trump as the President.

The financial world waited with bated breath on Thursday to see if it can hold on to the gains and stay over 20,000 mark.

The world’s biggest stock exchange, NYSE lists more than 2,400 companies with a market capitalisation of over $19.3 trillion.

Eight Indian companies, including Dr Reddy’s Laboratories, Wipro, InfoSys and ICICI, are listed on it.