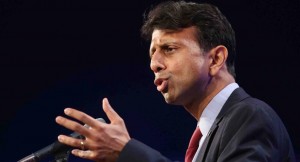 Washington, June 24 (IANS) Louisiana Governor Piyush “Bobby” Jindal on Wednesday made his much- anticipated entry into the 2016 White House race via Twitter making him the first Indian-American and 13th Republican candidate to do so.

“I’m running for President of the United States of America. Join me,” he tweeted with a link to his campaign site shortly after noon ahead of a planned formal announcement in the New Orleans suburb of Kenner Wednesday evening.

“A Special Announcement From Bobby Jindal. My name is Bobby Jindal, and I am running for President of the United States of America. There were three people I think you would agree my wife Supriya and I had to tell first,” said a second tweet.

Jindal’s tweet came shortly adviser Curt Anderson told reporters at a morning briefing: “We get into the race at 5 o’clock tonight,”

A hidden-camera style video of the governor telling his kids about his decision to run followed. His daughter quickly leveraged the information, requesting a puppy as her share of the deal.

“OK, if we move into the White House, you can have a puppy,” Jindal told his daughter.

Once viewed as a rising star of the Republican party, Jindal, 44, who was the youngest American governor when first elected in 2007, is now polling toward the bottom of the Republican field, registering at just 1 percent in the latest CNN/ORC poll this month.

Analysts suggested that he faces an uphill task in his campaign and even faces the prospect of being eliminated from Fox News’s presidential debates starting August 6 as the channel has decided to limit it to the top 10.

Jindal, who received wide support from Indian-Americans in his Congressional and gubernatorial campaigns, seems to have lost much traction with the community since he recently declared that he was tired of hyphenated Americans.

As Pearson Cross, a political science professor at the University of Louisiana at Lafayette who is writing a book on him told the Washington Post: “There’s not much Indian left in Bobby Jindal.”

The Louisiana-born son of immigrant parents from India, Jindal converted from Hinduism to Christianity as a teen, and was later baptised a Catholic as a student at Brown University.

The Rhodes scholar was the second Indian-American to be elected to the US House of Representatives in 2004 after Dalip Singh Saund, a Democrat, in 1957.