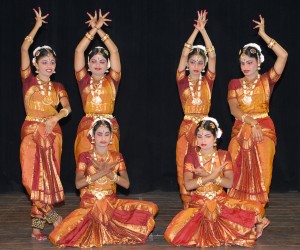 Atlanta, GA: “The best and most beautiful things in the world cannot be seen or even touched – they must be felt with the heart.” Helen Keller’s motivating quote seems to have been imbibed into students of Deepa Academy For Differently Abled. The institute based in Bangalore, India is committed to empowering the differently abled with quality education and promoting overall development with the guiding principles of self-help, interaction and involvement. The students enthralled audiences with their special dance performances in Atlanta at various venues including Hindu temple of Atlanta, at the Temple in Macon, Sri Sai Temple of Atlanta and several other states including New York, New Jersey, Washington, Delaware, Tennessee this September.

“These student dancers have successfully completed Rangapravesham and are very well trained and are proficient in different styles of classical Bharatanatyam, Kathak, and folk dances like Ghoomar from Rajasthan, Dandiya from Gujarat and Giddha from Punjab. Their dance guru is Dr. Suparna Venkatesh from the popular Maya Rao Institute in Bangalore. We are on a US .tour and our well-knit troupe has performed in different states to showcase their talents and skills-set in these dance forms. We request voluntary donations to help promote welfare of our girls,” says group co-coordinator R. Swaminathan. He added that all the shows were voluntary contributions and not fundraisers.

Founded in 2006 by R S Shantaram who is visually impaired, along with some friends, Deepa Academy works towards Education and Rehabilitation of the Blind and the Differently Abled students, particularly those hailing from rural Karnataka. The aim is to make them self-sufficient and independent. Current students hail from different districts of Karnataka including Shimoga, Tumkur, Mandya, Bangalore Rural, Mysore, Kodagu, Chamrajnagar, and Chitradurga. The Academy offers Regular Karnataka Secondary Education Board Curriculum to its students along with Co- Curriculum. The State Curriculum includes Kannada, English, Hindi languages, Economics, Political and Social sciences. Their Plus Curriculum includes Kannada, English and Hindi Braille, Orientation Mobility and Computer Training (Screen Reading software Jaws) along with training in usage of Brailler and Brailler Interpoint Slate and Stylus. Students are offered various Extra Curricular activities such as Music, Dance, Drama, Choir, and Handicrafts. Some of the many achievements of Deepa Academy include establishment of a High School for visually impaired girls, a free college hostel, a computer learning center and a cultural academy for visually impaired girls. They are also proud of their students who have successfully completed their exams and gained admission to well known colleges, competing with regular students. They have won many awards including the Kempe Gowda Award in 2010 by BBMP.

“The dance where the girls stood on top of each other was incredible” says eight year old Pragna Rao. “It was a great performance. They should continue to dance” say sisters Nisha and Naksha Pradeep.

“It was amazing how the girls walked around the room, holding hands, to get an idea of the dimensions of the small floor area given to them as stage. They also held hands, as they moved around the temple, as their way of staying safe.  Some of them might have had a little sight, but it was unbelievable how all the dancers smiled at the audience, and never took a misstep. For the audience, it was touching, and quite overwhelming.” quoted Indrani Dutta Gupta.

A truly commendable initiative by the academy to empower the differently abled and the indomitable spirit of its students are noteworthy and we wish them the very best in all their endeavors. You may visit http://www.deepaacademy.org/ for details.

Congratulations to our Baby of the Week, Anura Atre!