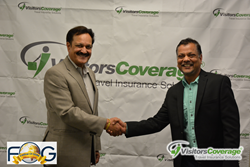 San Francisco,Calif.: VisitorsCoverage Inc. recently became the official travel insurance partner of Festival of Globe, a one of its kind event with a 10-day jubilant celebration starting from Aug 7th to 16th, 2015 in the Silicon Valley celebrating  the Indian heritage and film festival put on by the Federation of Indo Americans of Northern California (FIA). VisitorsCoverage is proud to be a sponsor of Festival of Globe and looks forward to showing its support of the Indian, American, and worldwide communities at the festival this August.

Festival of Globe aims to promote diversity and connect various communities through cultural film, music, and dance performances and will be hosting a number of organizations, vendors, and global celebrities.  The ten-day festival will feature Festival of India, an Indian heritage festival and parade, as well as the San Francisco Global Movie Fest. A number of actors, directors, and other celebrities from Hollywood, Bollywood, and worldwide will be making appearances at this year’s festival, with over a million people expected to attend. The FIA is a Fremont-based organization dedicated to providing community initiatives for Americans of Indian origin. It is an umbrella organization of over 50 Bay Area organizations that represent over 100,000 Indian Americans.

Festival of Globe will be happening August 7 through August 16, 2015, with the Festival of India and Parade taking place on August 15 and 16. Tickets are available online at http://sfmoviefest.com/buy-tickets/.

Sri Vidya – The Most Powerful Gateway to Kingdom Of Bliss