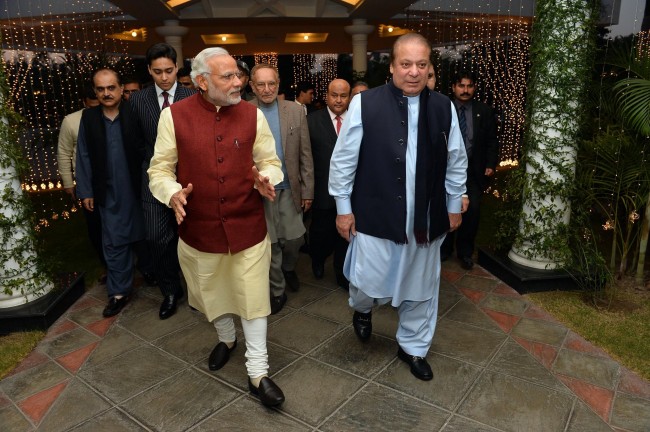 Washington, Dec 26 (IANS) Prime Minister Narendra Modi’s surprise stop in Pakistan to meet his counterpart Nawaz Sharif has made quite a splash here, with the US media hailing the significance of his “spontaneous personal diplomacy”.

The Wall Street Journal said Modi’s “gesture” was “likely to lend momentum to a tentative reconciliation process between the estranged, nuclear-armed neighbors”.

The influential Washington Post said that with his surprise stop in Pakistan, Modi had “pressed the reset button on the blow-hot-blow-cold relationship between the two nuclear-armed neighbors, paving the way for official dialogue to resume next month”.

The New York Times said the tense relations between India and Pakistan “have long worried American policy makers, who fear that proxy wars between the two countries could flare into a real one”.

“But with his flash of spontaneous personal diplomacy on Friday, Mr. Modi appeared to send a strong public message that the ambiguous course he has taken toward Pakistan has shifted to embrace engagement, not confrontation,” it said.

With his surprise visit to Pakistan, Modi had “breathed new life into a long troubled relationship”, said the Los Angeles Times.

Modi, it said citing analysts, “appears willing to endure criticism from hard-liners within his own Bharatiya Janata Party who oppose outreach to Pakistan, which they accuse of harboring Islamist militant groups that have frequently attacked India”.

Noting that Modi “showed a knack for wielding what can be a potent diplomatic weapon-the element of surprise”, Time magazine called his Friday visit to Pakistan as “The biggest surprise of all”.

“How the dialogue between the two countries now unfolds remains to be seen,” it said noting that Modi’s predecessor Manmohan Singh “never made it across the border, with tensions between two countries rising in the aftermath of the November 2008 terrorist attacks on Mumbai”.

“We welcome the December 25 talks between PM Modi and PM Sharif in Lahore. As we have long said, improved relations among neighbors will benefit the entire region,” spokesperson John Kirby said in a statement.