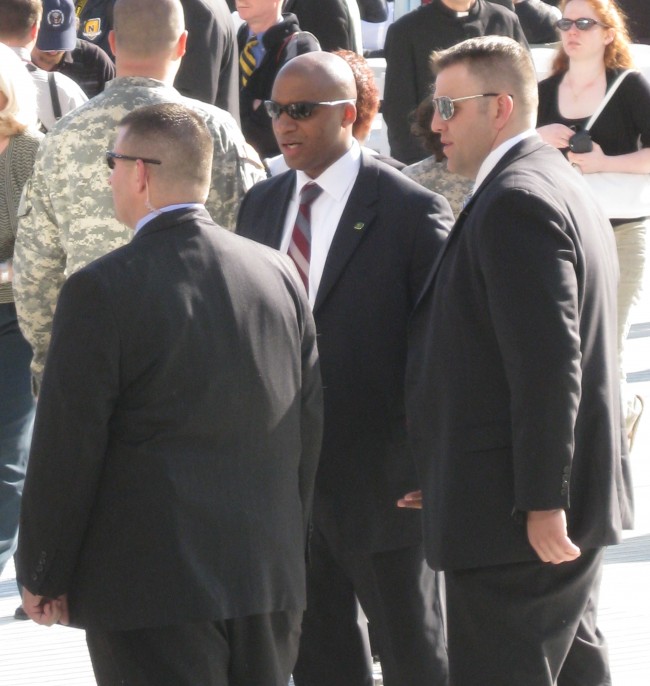 New Delhi, Jan 22 (IANS) With advance teams working against deadlines to complete all arrangements ahead of the arrival of President Barack Obama and his wife Michelle Saturday morning, Indian police and other security and intelligence teams have complained internally of being bulllied by their American counterparts, with some of their demands crossing “all limits.”

Sources said that the Secret Service agents Thursday mounted extra pressure on the Indian security agencies to submit them a final report over security arrangements in the capital by evening.

“We have shared our final security report with the Secret Service teams and the final discussion on the issue will be done tomorrow (Friday),” an official, on condition of anonymity, told IANS.

He said we have left no space for any security breach but the satisfaction level of the Secret Service team is “beyond the limits”.

“We respect all the delegation but they are treating us like we are for the first time welcoming the US president,” the official said, while sharing his feelings with IANS, even though they have been strictly told to stay away from the media.

Well-informed sources said that around 25 Secret Service agents arrived in the capital Jan 13. They have attended several meeting with the Intelligence Bureau (IB) officials and Delhi Police personnel for the security arrangements for Obama’s visit, but their “overbearing” attitude is said to be upsetting junior police officials.

“We have discussed every minute security detail of our arrangements with the Secret Service agents. We are also working on the suggestions they shared with us. But their demands are increasing every time. They don’t behave like the security agencies of other countries,” an official, close to the security arrangements for the Obama visit, told IANS.

He said: “I have done my 30 years in Delhi Police and made arrangements for several high profile foreign dignitaries. I have good friends in security agencies of other countries, but the US Secret Service agents are not like them. They are very rude and overbearing. It appears that they do not like to give any importance to us.”

Another source told IANS that the advance US Secret Service agents are “interfering in all our security arrangements and trying to show themselves as more competent and with more expertise”.

Since the US Secret Service team arrived in the capital, they are “demanding new things and trying to point out loopholes in several aspects”, he said.

“Now they want to position surveillance satellites to track each and every movement of Obama, and are pressurizing us to cut short the time of Obama’s stay in the open air on Rajpath for the Republic Day parade,” the official said.

“We are ready to provide surveillance satellite facility on Rajpath on Jan 26 as we are also keen to ensure safe arrangements for the VVIP enclosure where Obama will be seated along with President Pranab Mukherjee and Prime Minister Narendra Modi.

“Despite all our efforts to please them with our arrangements, the Secret Service agents are exhibiting their mistrust in us. Now they have demanded to deploy dozens of their own snipers on the rooftops in the two-kilometre circle of Rajpath along with Delhi Police snipers,” he said.

The Indian security agencies are ready to provide a seven-layer security on Rajpath during the two hours that Obama will spend in the open watching the parade.

The US forces will provide close proximity security to Obama while the Special Protection Group (SPG) will be in the second layer, and the third will be covered by the National Security Guard (NSG) commandos, while other three layers will be managed by the Delhi Police.

Another team of over 300 US Secret Service agents will reach Delhi Jan 25 morning along with the US president, another official said.

The US team is staying in the super-luxury ITC Maurya hotel where the US president will be stationed during his three day visit between Jan 25 and Jan 27,