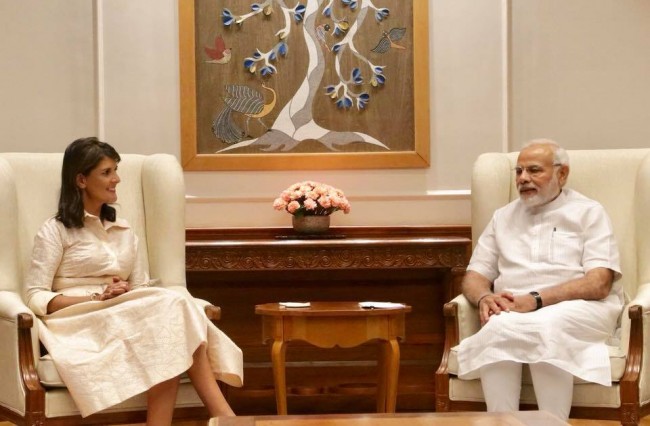 New Delhi, June 27 (IANS) US Ambassador to the UN Nikki Haley said on Wednesday that religious freedom is as important as the freedom of rights and of people.

The highest ranking American of Indian origin in US President Donald Trump’s administration, Haley said there were multiple opportunities between the US and India including in counter-terrorism or military cooperation.

Haley, who is on a visit from June 26-28, said her visit was aimed “at once again solidifying” love for India and there were more and more reasons for the two countries to come together.

She said both India and the US share common values and have a lot in common.

“We look to the fact that we are two of the oldest democracies that share the value of people, the values of freedom, the values of opportunity. We see there are opportunities between the US and India in multiple levels.

“Whether it is countering terrorism, whether it is the fact that we want to continue our democratic opportunities, or start to work together more strongly on the military aspect, there are lots of things that India and the US have in common,” she said as she visited Humayun’s Tomb earlier in the day.

Haley said the US was keen to further strengthen its relationship with India.

“I am here to once again solidify our love for India, our belief in the friendship that India and the US have and our willingness to make that relation even stronger. In this day and time we see more and more reasons for India and the US to come together.”

She added: “It is great to be back.” The US envoy was on her first visit to India after becoming US ambassador to the UN.

The daughter of Sikh immigrants from Punjab, Haley last visited India in 2014.

Earlier in he day, she met Prime Minister Modi. During the meeting, Haley noted the deepening relations between India and the US particularly in strategic and defense sectors, a statement said.
Modi expressed appreciation for US President Donald Trump’s South Asia and Indo-Pacific strategies and commended his initiative for denuclearization of the Korean Peninsula.
“Both the dignitaries discussed ways to enhance India-US cooperation including on counter-terrorism and in multilateral fora. They expressed confidence that strong India-US partnership will continue to be an important factor for global peace and prosperity,” the statement said.
Haley, who is on a two-day visit to India, had called on Modi to convey greetings from the US President.
Recalling his earlier meetings and interactions with Trump, Modi also requested Haley to convey his best wishes to the US President.