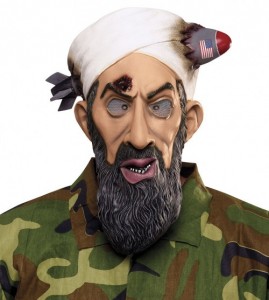 US-based community advocacy organisation Sikh Coalition called the costume offensive to 9/11 victims and perpetuates “negative stereotypes about turbans and beards that have led to violence and discrimination against Sikhs and other minorities”.

The Sikh advocacy organisation has sent letters or made phone calls to several retailers selling the item to request its removal.

The costume appears to be manufactured by Fun World Costumes, and is for sale on the sites of retailers such as Sears and Rite Aid, among others.

Sikh Coalition Advocacy Manager Simran Kaur wrote to Amazon president and CEO Jeffrey Bezos saying that the costume “insults those who lost loved ones during the 9/11 terrorist attacks, insults American soldiers injured or killed in pursuit of Al Qaeda”.

“We disabled this item for purchase and are in the process of immediately removing it from our site,” a Walmart spokesman told The Huffington Post in an e-mail, adding that the costume was not available in stores.

“We sincerely apologise to any customers who may have been offended by this costume.”

The complaint to the retailers comes in the wake of a recent attack in New York on Prabhjot Singh, a turbaned Sikh doctor and Columbia University professor, who was beaten up by a gang of teenagers calling him a “terrorist” and “Osama”.

Meanwhile, a pub in Los Angeles’s Hollywood district, has also removed portraits of Sikh Gurus that it had displayed in its bar area following objections from the Sikh community and the intervention of the Indian consulate.

United Sikhs, a Sikh advocacy group which launched an online petition for the removal of the portraits from the Pikey Bar and Restaurant in Los Angeles welcomed the decision.

“In future, we hope business establishments will be more considerate of, and sensitive towards religious sentiments of every community,” said the group’s attorney Manmeet Singh.