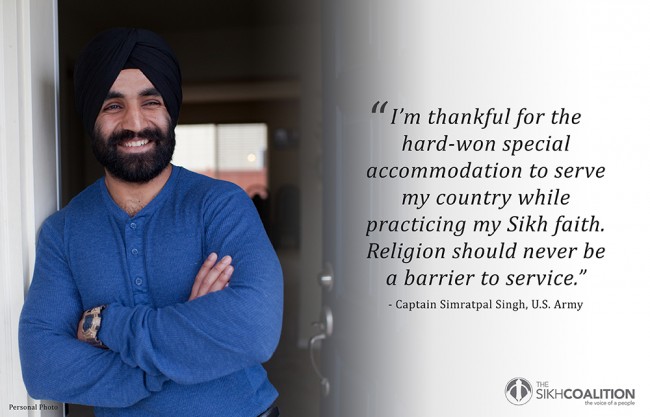 Washington, April 2 (IANS) An Indian-American Sikh military officer in US has been granted permission to wear a religious beard and turban while in uniform, the media reported on Friday.

The US Army’s decision to the make permanent religious accommodation for Capt. Simratpal Singh makes him the first active-duty combat soldier in decades to be permitted to wear a turban and beard, www.nydailynews.com reported.

The ruling ended the protracted battle that pitted individual religious freedom rights against what the military said was a need for uniformity and strict safety standards.

Singh, 28, an observant Sikh had to cut his hair and shave his beard when he joined the West Point military academy in 2006.

“It was excruciating. For 18 years of your life, you’ve had a certain image of yourself. All of a sudden, it’s shattered within 10 minutes,” Singh was quoted as saying.

Ten years later, Singh, now an Army Ranger and Bronze Star Medal recipient, in a bid to reclaim that image asked the US Army in October to allow him to begin wearing a beard and turban. Facing a discrimination lawsuit, the Army granted him a temporary accommodation in December.

In February, with the temporary accommodation set to expire, the Army insisted Captain Singh to undergo extensive testing to make sure his beard and hair wouldn’t interfere with his helmet or gas mask.

Singh filed suit citing religious discrimination. A judge ruled that the Army couldn’t impose the individualised testing on Singh and ordered the service to decide on his request by March 31.

On Thursday, in a court ruling Singh was finally granted a permanent accommodation.

“Because of the Army’s strong interest in maintaining good order and discipline, the Army intends to develop clear, uniform standards applicable to soldiers who have received religious accommodation,” Debra S. Wada, the assistant secretary of the Army for manpower and reserve affairs, wrote in a memo to the captain released on Friday.

Until those standards are in place, she said, Captain Singh will be expected to appear in a “neat and conservative” manner with a black or camouflage turban.

Singh, who grew up in Punjab, immigrated to the US at the age of nine after his father was granted political asylum in the country. His grandfather often regaled him with tales of fighting in World War I as a soldier in the British Indian Army, which instilled in him the desire to join the military.