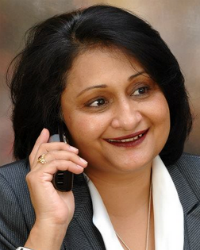 Washington, March 21 (IANS) Controversial Indian-American candidate Manju Goel has lost the race for the Republican nomination for US House member from Illinois to Larry Kaifesh, a US Marine Corps Reserve colonel.

With 95 percent of precincts reporting Goel had garnered 9,338 votes to Kaifesh’s 23,295 votes in Tuesday’s primary for the State’s eighth Congressional district, according to Courier News.

The primary race had became contentious with Kaifesh challenging Goel’s election petitions and Goel branding the move as racially motivated as Indian and Hispanic names were under scrutiny, Courier News said.

Last week, the Kaifesh campaign claimed that Goel supporters were being investigated for trying to buy votes, with complaints filed with the Cook and DuPage County State’s Attorneys’ offices.

According to the phony site, which resembled Kaifesh’s official campaign web site, it was paid for by a super political action committee called Indian Americans for Freedom, which lists Goel’s address, local WLS-TV reported.

However Goel claimed she has no control over the IAFF organization. “I cannot account on anybody else’s actions,” she was quoted as saying. “I cannot tell you, because I do not know where the PAC is.”