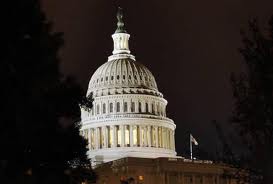 Washington, Oct 30 (IANS) US lawmakers joined Indian-Americans for the first ever Diwali celebrations on Capitol Hill after the US Congress passed resolutions honouring the Indian festival of lights and celebrating the strong relationship between the US and India.
Tuesday evening’s festivities on Capitol Hill, the seat of the US Congress, were marked by about 25 lawmakers, both Democrats and Republicans, joining in the lighting of traditional ‘diyas’ or lamps amidst chanting of Vedic mantras by a Hindu priest.
Lawmakers were welcomed to the event with a red ’tilak’ on the forehead and a jasmine garland. A Hindu priest presented them traditional shawls.
“I have come here to say Happy Diwali,” said Nancy Pelosi, former speaker and leader of the Democratic Party in the House.
“United States owes a great debt of gratitude to India,” she said, “because our civil rights movement was built on the non-violent movement in India.”
“This is a truly historic event,” said Joe Crowley, Democrat co-chair of the Congressional Caucus on India and Indian Americans, who organised the celebrations with his Republican counterpart Peter Roskam.
“You have the ability to bring together people from both sides of the aisle in ways that are powerful and significant,” said Roskam referring to the “incredible influence” of the Indian diaspora.
Starting his speech with “Jai Hind”, Ed Royce, Republican chairman of the House foreign affairs committee said their goal should be to strengthen and deepen US-India relationship.
Tulsi Gabbard, the first Hindu American member of the US House, calling it a “celebration of righteousness”, said the diversity in the Congress is indicative of the special nature of Diwali itself.
Ami Bera, the only Indian American member of the US House, called it an “incredible celebration” and expressed the hope there would be more lawmakers from the diaspora at Diwali celebrations in the not too distant a future.
Separate bipartisan Diwali resolutions adopted by the two chambers of the Congress honour “an important tradition of Hindus, Sikhs, and Jains in the flourishing Indian-American community in the United States as well as those of our partners in India”.
The Senate resolution, introduced by Mark Warner and John Cornyn, Democratic and Republican co-chairs of the Senate India Caucus, supports a “strong relationship between the people and governments of the US and India”.
The House resolution introduced by Crowley and Peter Roskam, expressed deep respect for Indian-Americans and the Indian diaspora and appreciated the religious diversity in both India and the US and throughout the world.
Although Diwali was celebrated on the Capitol Hill for the first time Tuesday, the festival’s importance came to be recognised first in 2003, when the White House held its first celebration of the festival under then president George W. Bush.
Keeping up the tradition, President Barack Obama joined the White House Diwali celebrations in 2009 featuring popular Indian-American a capella group Penn Masala.