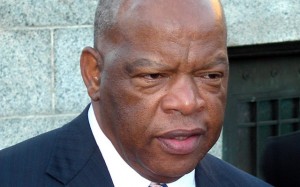 Washington, Aug 8 (IANS) Even as a miffed President Barack Obama cancelled talks next month with Russian President Vladimir Putin ahead of the G-20 summit, a lawmaker of his party compared classified leaker Edward Snowden with Mahatma Gandhi who fought for his values and beliefs.

Snowden, who was given asylum by Moscow for a year was appealing to a “higher law”, Georgia Democratic House member John Lewis, a prominent civil rights leader, told The Guardian in an interview with published Wednesday, according to Poltico, an influential Washington news site.

Asked if Snowden’s leak was civil disobedience, Lewis said: “In keeping with the philosophy and the discipline of nonviolence, in keeping with the teaching of Henry David Thoreau and people like Gandhi and others, if you believe something that is not right, something is unjust, and you are willing to defy customs, traditions, bad laws, then you have a conscience.”

“You have a right to defy those laws and be willing to pay the price,” he was quoted as saying.

Russia last week gave asylum to Snowden, a former CIA contractor who had been holed up for weeks in the international transit zone of Moscow’s airport since fleeing the US for Hong Kong and then Russia after leaking details of several top-secret US and British government mass surveillance programmes.

Told that many in Washington believe Snowden is a criminal, Lewis said Snowden was appealing to a “higher law”.

“Some people say criminality or treason or whatever,” Lewis was quoted as saying. “He could say he was acting because he was appealing to a higher law. Many of us have some real, real, problems with how the government has been spying on people.”

Have a swab, get a drink, save a life!

Khobragade formally indicted by US court, on way back home