Atlanta, GA: The 19th Annual All Nations Deeper Life Convention was held from July 26-28th, with its theme: “A Life Worth Living.”  The speaker for this year’s convention was Rev. Arun Andrews from Bangalore, India, who serves on the Ministry Team of Ravi Zacharias International Ministries.

Rev Andrews’ messages were extremely touching and blessed those attending. He helped people to realize the fruitfulness of living a life worth living and believing every morning that the best is yet to be.  “By not living in the past, we will lead ourselves and others to a brighter and beautiful tomorrow,” he said. 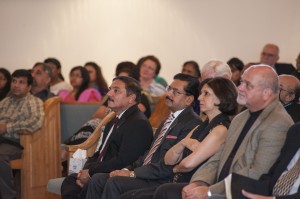 Rev. Andrews is a graduate in Economics from Madras Christian College and has a Master’s Degree in Divinity from UBS Pune.  He has delighted audiences in schools, colleges, corporate offices and churches. He has been privileged on special occasions to speak at the IMB, Oracle, SAP Labs, Bosch and the Indian Institute of Science, Bangalore. Rev. Andrews’ radio messages are broadcast in India and many other countries.

A praise and worship team led by Dr. Tanmay Pramanik provided delightful music. Sandra Oberoi, who heads her own school of music in Bangalore, India, and is a great opera singer, also participated in this event. John Macdonal and Sharoon Farhat lead in the singing and music of the First Asian Indian Baptist Church choir. 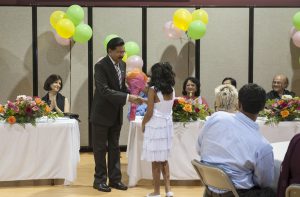 The highlight of this event was the Saturday night service graced by the Honorable Ajit Kumar, Consul General of India in Atlanta. A special ceremony was arranged to welcome the Consul General and his wife Margaret by Rev. Younis Farhat.  The ceremony was started with the national anthems of America and India being sung by Yamin Farhat and Atlanta’s talented Indian vocalist, John Macdonal. 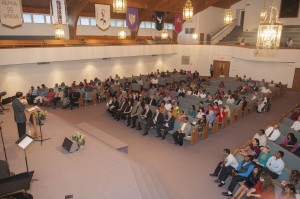 The Consul General was welcomed by the Rev. Jerry Baker on behalf of the Georgia Baptist Convention.  He brought greetings and welcomed him by extending friendship to the entire Indian nation and for building strong relations.  Dr. Larry Fillingim, Director of the Noonday Baptist Association, was at hand to welcome Mr. Ajit Kumar to Marietta and the many Baptist Churches of the Noonday Baptist Association.  The event was also graced by many other leaders of the Christian community of Metro Atlanta.

Community leader, Subhash Razdan, was congratulated by Rev. Younis Farhat, Senior Pastor, for being awarded the Pravasi Samman 2013 Award.  Speaking on the occasion, Razdan remarked of the invaluable services provided by Pastor Farhat to the entire Indian community.  He was grateful for the grand farewell dinner hosted by the First Asian Indian Baptist Church for the entire Olympic Contingent from India during the 1996 Olympics.  The guests included top diplomats from India, the U.S. and community leaders.  He also expressed gratitude to the Church for being the first to make a monetary award for Leander Paes for winning the bronze medal for India after a 30 year gap.  This was followed by IACA and the government of India, he said.  Pastor Farhat and his congregation have always supported the Indian community, organizing many events and sponsoring support.

Norma Charles, retired Indian missionary of the Georgia Baptist Convention, spoke highly of Pastor Farhat’s faithful services for the Indian community and stated that “he is the best Indian pastor.”

Consul General Ajit Kumar expressed his deep appreciation for the warm welcome he and his wife were given by a large Indian/Pakistani congregation.  He was given a bouquet by Serena Grace Macdonal, pastor’s granddaughter.  Mrs. Anjula Charles placed a shawl over the shoulders of the Consul General in the traditional Indian welcoming of guests of honor, while Surriya Farhat, pastor’s wife, handed a bouquet to Mrs. Margaret Kumar.

It was grand evening with several prominent members of the Indian community in attendance, including Dr. Paddy & Chandler Sharma, IACA president Kaushal Tripathi, Gandhi Foundation’s Anthony Thaliath, GIACC’s Viren Mayani and members of the media represented by NRI Pulse’s Veena Rao and India Tribune’s Ravi Ponangi. The guests were treated to a delicious dinner catered from Swapna Restaurant.  The program also included celebrating the birthday of Dr. Paddy Sharma by cutting a cake in her honor and thanking her for her services to the community.  The entire hall and every table were beautifully decorated with lovely centerpieces.  It was a lovely and inspiring evening enjoyed and appreciated by everyone in attendance.

The low side of the evening was the recent tragic death of Leo Charles, a talented musician of the Church with great potential.  His death on July 19, 2013, had buried the family, friends and congregation in deep grief.  His funeral service on July 25, 2013, conducted by Pastor Farhat, was attended by a very large number of friends and relatives.  A moving montage on the life of Leo Samuel Manish Charles prepared by Sharoon Farhat moved everyone to tears.