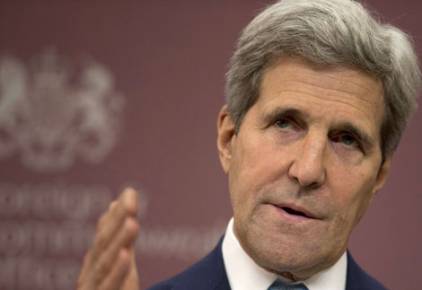 Washington, July 29 (IANS) Stressing that the US and India have the potential to become indispensable partners in the 21st century, Secretary of State John Kerry said Washington wants to support the Narendra Modi government’s vision of “Sabka Saath, Sabka Vikas” (Together with all, Development for all).

Kerry, who arrives in India this week for talks with the Modi government, said Monday evening that he would be “emphasizing the opportunities” in which the US and India can become indispensable partners when he touches base with the new Indian government.

Kerry, who mentions Modi’s name 11 times in his address at the Center for American Progress (CAP), a major US think-tank, said: “The new Indian government’s plan, ‘Sabka Saath, Sabka Vikas’, together with all, development for all – that’s a concept, a vision that we want to support.

“We believe it’s a great vision, and our private sector is eager to be a catalyst in India’s economic revitalization.”

Speaking on the subject “The US and India: A Shared Vision for 2020 and Beyond”, Kerry touched on Modi’s invite to South Asian leaders for his swearing in May 26.

“And by inviting leaders from around the region to his swearing-in, and by bringing them together to speak about connecting their economies as one of his first orders of business, he is eager for India to play a leading role. And guess what? So are we.”

He said both Modi and Sharif “are business-minded leaders who want to create opportunity for their people.

“I talked to Nawaz Sharif after his visit there. He was very encouraged, thought it was positive, possibilities he understood. So improved trade is a win-win for both countries and both peoples.”

He said the US was committed to do everything to encourage India and Pakistan to work together and improve ties.

He pushed for India and the US increasing bilateral trade from $100 billion to $500 billion and said it was in their “mutual interest” to address the “obstacles that kind of raise their head here and there as you go along”.

Kerry said both sides needed to build on the US-India Civil Nuclear Agreement “so that American companies can start building and can start providing clean power to millions in India”.

Kerry said the present moment could be a time “where our destinies actually do converge” and called for both sides to harness their capacities, deepen their partnership and make smart choices.

“That is why I leave for Delhi tomorrow (July 29) night, and that is why the president will welcome Prime Minister Modi to Washington in September.

“Because this is the moment to transform our strategic relationship into an historic partnership that honors our place as great powers and great democracies.

“We intend to leave not an instant behind us. We are going to get to work now.”