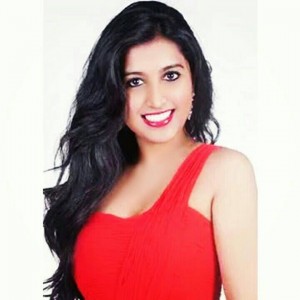 She will be representing South Asia at Miss International 2014 in Florida on Aug 1 and 2.  Her platform is educating children and providing clean water in the underprivileged countries.

Trisha said her goal is to provide a global voice for one of the country’s biggest epidemic, obesity.  She won the award from American Association of Physicians of Indian Origin (AAPI) at the pageant.

She was the guest Judge for the Miss Teen ATA and Miss Junior ATA Pageant held in Philadelphia this year where she crowned the winner.

Trisha is a senior at Queens College, and is the President of UNICEF at QC chapter. She Won Rising star award for her leadership raising the bar of the QC chapter in 2013 at the UNICEF Annual Campus Initiative by advocating, educating, and fundraising in her local community organizations.

She is working as the global advocate for US Fund for UNICEF and was invited as one of the three inspiring youth selected from all over United States to speak on behalf of the UNICEF Campus Initiative activities at the UN Foundation panel moderated by the CEO and President of US Fund for UNICEF. Caryl Stern which is to be held in New York. Hollywood Celebrities like, Padma Lakshmi and Olivia Wilde were also invited as the guest speakers at the event.

She is also President Barack Obama’s Volunteer Service Award winner for the year 2014. Prathyusha raised the most funds during 2013 and was the winner of Trick and Treat Champion award during her first year she joined the organization

In July 2013, she received the “Outstanding Leadership Award” from TLCA cultural organizations for being a youth role model in her community by organizing events like the Water Walk for UNICEF Tap Project and UNICEF Awareness and by conducting several fundraising camps at community events.

In a community event held in New York on April 12, 2014, she was honored for winning the crown and for her outstanding community service and was felicitated by from Miss India World 2005, Sindura Gadde.

Her goal is to help people that can’t help themselves, she said. As the global advocate for US fund for UNICEF and Miss South Asia International 2014, she works with UNICEF and other organizations to educate and advocate, to save and improve the lives of Children worldwide.