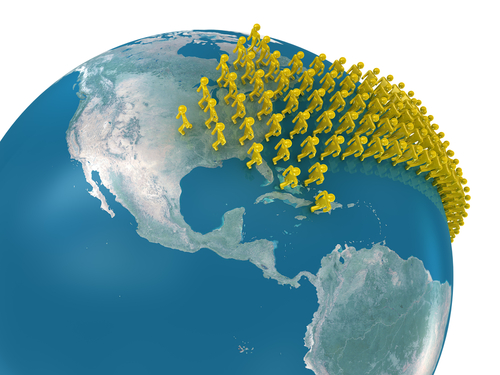 Washington, Nov 19 (IANS) As President Barack Obama mulls executive action to give relief from deportation to some of the 11.2 million illegal immigrants in the US, a new report said about 450,000 of them are from India.

In fact, India is the fourth top source country of unauthorised immigrants after top-ranked Mexico, according to the report based on the 2012 census, released Tuesday by the Pew Research Centre, a Washington think tank.

Ranking second, with considerably fewer unauthorised immigrants than Mexico, is El Salvador (675,000 in 2012).

Republican leaders, who will control both houses of Congress next year as a result of the November elections, have warned Obama that any executive action would torpedo the chances for a bipartisan immigration reform bill.

Among the groups widely thought to be under consideration for relief from deportation are long-time US residents with US-born children, the report noted.

Mexicans are the largest national origin group in 36 of America’s 50 states.

Mexicans are not the largest group in three New England states, the area around the nation’s capital as well as Alaska, Hawaii and Louisiana.

India is the largest birth country of unauthorised immigrants in New Hampshire, the report said.

It saw increases from several regions including Honduras, India and the Dominican Republic.

The number of unauthorised immigrants in the US has remained unchanged around 11.2 million since 2009 after decades of rapid growth, the report noted.

But there have been shifts in the states where unauthorised immigrants live and the countries where they were born.

Unauthorised immigrants currently make up 3.5 percent of the nation’s population of 316 million, the report said.

Preliminary estimates show the unauthorised population was 11.3 million in 2013.

The number of unauthorised immigrants peaked in 2007 at 12.2 million, when this group was four percent of the US population.

I want to settle down again, says Zeenat Aman