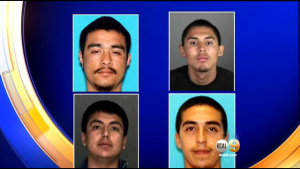 New York, June 5 (IANS) US police have arrested five members of a street gang in Long Beach city for stealing gold from Indian families across California and Nevada, a media report said.

The gang members, who were involved in dangerous criminal acts like murders, take-over robberies, extortions, and drive-by shootings, had turned to burglarizing Indian families, robbing them of gold, cash and other valuables since February 2013, CBS local reported Wednesday.

The hunt for other suspects is under way, police said.

Gary Pentis, Ventura county assistant sheriff, said the suspects were found the same way as the alleged thieves found their victims — through Facebook.

“A lot of these are on Facebook, MySpace, Instagram, where they are bragging, showing gold and cash from their robberies, with their face,” the assistant sheriff said.

Pentis said the gang was using internet to identify people of Indian descent and locate their houses.

“They preyed on these people because it has been a culture of passing down jewellery, gold through generations. This was known to the criminal groups that this was kept in the home,” the report quoted Pentis as saying.

Police also reached out to members of the Indian community in Ventura County in a bid to check the crime spree.

Approximately 20 percent of the 100 residential robberies occurred in Ventura county, a county in southern California.

“These people did surveillance on the victims. They drove nice cars that fit into the communities that they were surveilling and they dressed appropriately for the culture of the area they were in,” Pentis added.

Officials said the suspects were sophisticated criminals, leaving no fingerprints or DNA at the homes they burgled.

Long Beach is a city in Los Angeles county in southern California on the Pacific coast.