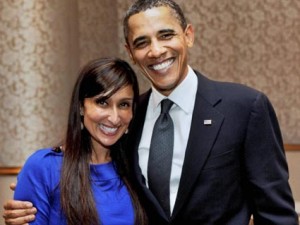 Washington, June 4 (IANS) President Barack Obama is appointing Shefali Razdan Duggal, a top Indian-American fundraiser of his 2012 re-election campaign, as a member of the governing board of trustees of the US Holocaust Memorial museum that opened in 1993.

Political activist Duggal’s appointment to the 55-member US Holocaust Memorial Council for a five-year term was announced by the White House Tuesday with five other key administration posts.

“The extraordinary dedication these men and women bring to their new roles will greatly serve the American people,” said Obama in a statement.

“I am grateful they have agreed to serve in this Administration and I look forward to working with them in the months and years to come.”

According to Razdan Duggal’s website she is currently also a co-chair for the “Ready for Hillary PAC”, an independent political action committee that is “encouraging” former Secretary of State Hillary Clinton to run for president in 2016.

Razdan Duggal is a member of the Democratic National Committee (DNC) National Finance Committee and is the DNC National Co-Chair for the Women’s Leadership Forum, according to White House.

Razdan Duggal was a political analyst for the Staton and Hughes Strategy Firm from April to November 2001.

She is a member of the National Board of Directors for EMILY’s List, the Human Rights Watch California Committee North, and the National Advisory Board of Doctors for America.

Razdan Duggal received a BS from Miami University of Ohio and an MA from New York University.

Indian idols traced to museums in the US, probe commences