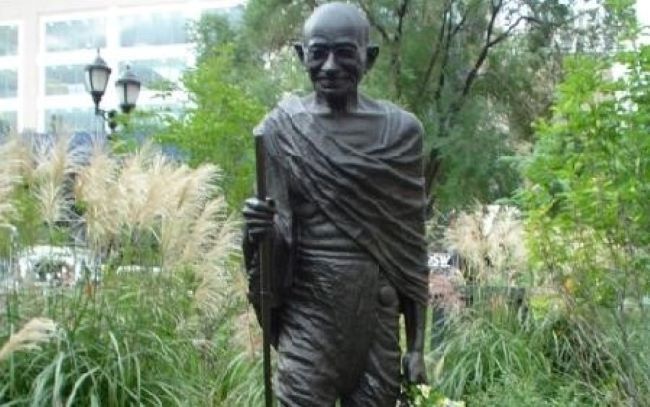 New York, Feb 10 (IANS) The US State Department has expressed concerns over the attacks on statues of Mahatma Gandhi and is asking law enforcement to investigate the incidents, according to a spokesperson.

“The Department of State is in regular communication with law enforcement partners and encourages investigation into these incidents,” the spokesperson said in an email to IANS.

In the latest incident, the statue of Mahatma Gandhi in New York City’s Union Square was defaced with black paint on February 4 and it followed an attack on the Independence leader’s statue in Washington on India’s Republic Day, January 26.

India’s Consulate General in New York took up the defacement of the statue in the city with the State Department and local authorities.

New York Commissioner for International Affairs, Edward Mermelstein, called to express concern over the incident, according to the consulate.

The police department has also been alerted by the consulate to the incident and was investigating.

An official in New York City Mayor Eric Adam’s office told IANS that they were “looking into this”.

The State Department spokesperson wrote: “We are aware of the recent defacement of several statues of Gandhi and have shared our concern regarding these incidents with our Indian counterparts.

“The Department recognizes the continued importance of Gandhi’s message of non-violence, respect, and tolerance.”

The Consulate condemned the statue’s defacement in a tweet and said that it had taken up the matter “with the local authorities and the State Department for immediate investigation and appropriate action against those responsible for the despicable act”.

The Chairman of Global Organisation of People of Indian Origin (GOPIO) International, Thomas Abraham, said” “We Indian-Americans are deeply hurt by the disrespect shown to Gandhiji, especially when we are observing the Black History Month, celebrating the contribution of African-American leaders including the late Rev. Martin Luther King who was inspired by Mahatma Gandhi’s non-violent struggle against the British Empire to achieve freedom for India.”

GOPIO Manhattan Chapter President Shivender Sofat said that “the culprit must be apprehended and punished”.

Gandhi’s statues across the US have come under attack in recent years.

The statue in New York is located in an area around the New York University and has been the subject of a change.org petition for its removal started by persons described as “NYU Students”.

Although the petition has been up for at least two years, it has gathered only 38 signatures.

However, civil rights leader Bayard Rustin was the keynote speaker at the dedication of the statue in 1986.

Rustin had traveled to India in 1948 to study Gandhi’s non-violent civil resistance movement and introduced it to civil rights leader Martin Luther King, who adopted it in his quest for the rights of African-Americans

The statue sculpted by Kantilal Patel joined a “quartet of works devoted to defenders of freedom” in Union Square Park comprising statues of George Washington, the father of the US; Marquis de Lafayette, a hero of the US War of Independence, and Abraham Lincoln, who abolished slavery across the US, according to the City’s Parks Department.

The statue in Washington had vile personal attacks on Gandhi and anti-India slogans painted on it during the anti-police excesses demonstration in June 2020 and was vandalized again in December that year by pro-Khalistani elements during a protest in support of the farmers’ agitation in India.

The recent Republic Day attack was carried out by Khalistan supporters.

India’s External Affairs Ministry spokesperson Arindam Bagchi said the Indian government had asked US officials to take action against those vandalizing it.

In another incident, the statue of Gandhi was cut at its leg and toppled over and its head was cut in half in Davis in California in January last year.

Reacting to the incident, President Joe Biden’s spokesperson Jan Psaki said the administration would “condemn that desecration and watch it closely”.

The same statue had also been vandalised with slogans in June 2020.