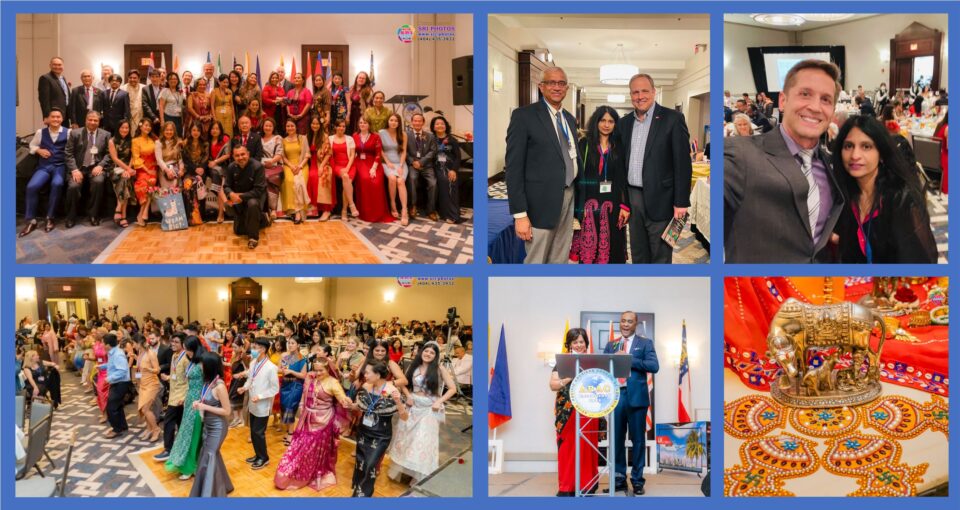 Well over 400 guests, including community, business, and legislative leaders, attended the celebration commemorating three decades of expanding Asian American unity in Georgia. In his message, Governor Kemp congratulated and recognized the influence of APAC community in Georgia. Gary Black, Commissioner of Agriculture delivered the keynote address for the evening.

The Gala, a celebration of Asian Pacific American Heritage Month was themed “Uniting Our Voices” this year, paying tribute to Asian community members who lost their lives during the Atlanta Spa Shootings in March of 2021. “APAC is a strong supporter of Stop AAPI Hate Crime”, APAC President Sudhir Aggarwal remarked.

APAC also recognized Immediate past president, and past presidents, along with their sponsors and volunteers. Vivacious performances representing Vietnamese, Korean, Laotian, Taiwanese, Indian, Cambodian and Indonesian ethnicities in their traditional clothing, music and moves enhanced the Asian experience for the audience. Rendition of National Anthem by Hanna Raharjo, Parade of flags, Color Guard were all part of the extravaganza.

Along with spectacular performances from representatives of each country, AAPI also recognized one member from each member organization for their contribution in the academic, social, community and philanthropic domains with its “Community Achievement Award”, that served as the focal point of the Gala.

“This is the first year we are initiating this award and I am glad to recognize this award in Honor of the Late Dr Narsi Narasimhan, APAC’s Past president (2005), a visionary and one of the most renowned networkers known to the City of Atlanta.” Aggarwal said. The award was sponsored by “Sprinkling Smiles”, an initiative founded by Swati and Sudhir Aggarwal, that has provided 170K meals during Covid. Recipients of this year award included Dr. Jag Sheth, Charles H. Kellstadt Professor of Marketing at the Goizueta Business School of Emory University, Chunghee Park, VP, Korean American Association of Greater Atlanta, Pamela Peterson, Founder, Philippine Nurses Association of Georgia Foundation, Alexandra Kuo, currently raising funds to establish endowment fund for department Pharmacology and Chemical Biology, Emory University School of Medicine, Noy Bozarth, Past President, APAC, Dr. CP Huang, Admiral USN (Ret,. Hon.), President, FAPA, President, ATAA, Past President, APAC, Tinh Doan, President, Republic of Vietnam Arm Force Coalition of GA.

“I am very pleased that APAC under the leadership of Sudhir Agarwal decided to establish the Dr, Narsi Narsimhan award for community service and leadership. I am honored and humbled to be the first recipient for India.” Dr. Sheth told NRI Pulse.

“As a founding member of APAC, IACA (India American Cultural Organization) is committed to the promotion of cultural ties and business contacts among member organizations,” noted Chand Akkineni, President, IACA.

Asian American and Pacific Islander Heritage Month is observed in the United States during the month of May to recognize the contributions and influence of Asian Americans and Pacific Islander Americans to the history, culture, and achievements of the United States.  A joint resolution authorizing the President to proclaim annually a week during the first 10 days in May as Pacific/Asian American Heritage Week.” was text in House Joint Resolution 540; this resolution as well as Senate Joint Resolution 72 did not pass. Ultimately, Rep. Horton’s House Joint Resolution 1007 was passed by both the House and the Senate, and was signed by President Jimmy Carter on October 5, 1978, to become Public Law 95-419. In 1990, George H.W. Bush signed a bill passed by Congress to extend Asian-American Heritage Week to a month; May was officially designated as Asian/Pacific American Heritage Month two years later. On May 1, 2009, President Barack Obama signed a Proclamation recognizing the month of May as Asian American and Pacific Islander Heritage Month.

The first Asians documented in the Americas arrived in 1587, when Filipinos landed in California. Georgia is currently home to over three hundred thousand citizens of APAC heritage and one of the fastest growing groups in the US. The celebration of APAC heritage, a far cry from the 1911 special commission established by the US Congress which declared that the earliest of this community was “universally regarded as the least desirable race of immigrants thus far admitted to the United States,” is reflective of the long and arduous journey treaded by our previous generations to pave a smoother path for the current and generations to come.

Vikram: Fahadh Faasil steals the show in this action entertainer