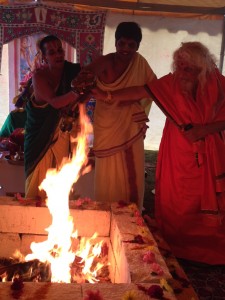 His Holiness Sri Viswamjee Maharaj who is on his US tour and currently in Atlanta not only participated in the homam but also gave an uplifting spiritual discourse later. The homam was under a huge canopy erected on the lawn facing the Temple. A homam-kunda was artfully decorated with fresh flowers and fruits under which Sanjay Rao (North Carolina) and priests Govardhanam,Ravi Shankar performed the homam and also guided the devotees including children  in performing the elaborate rituals and in chanting Vedic shlokas in front of the consecrated fires. Sri Subbiah Emani and priest Srinivas Sarma also helped with the Poornahuti.  After Poornahuti, in his brief but elevating spiritual discourse, Swamijee said, “Thousands of years ago, this universe was only a tiny dot or bindu. In the bindu there are three powerful forces–power of will(icchasakti), power of knowledge(jnanasakti) and power of action(kriyasakti). MahaLakshmi is the Goddess of wealth,  and embodiment of beauty,  grace and munificence.  She is also the confluence of the three powers–will, knowledge and action. MahaLakshmi is present in every atom. With her grace one attains power and peace.” 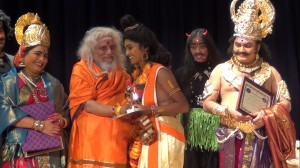 Swamijee prayed for close Indo-US relations and peace and prosperity in both countries. He thanked the temple priests and devotees for participating in the Homam. “Temples, homams, spiritual discourses, and blessings of holy swamijees create positive vibes, helps recharge one’s energies, purifies, empowers and uplifts individuals”, he said. He concluded by leading all in chanting Om Sri MahaLakshmi namah.

Hindu Temple President Narender Reddy expressed his warm welcome on behalf of the temple to the Swamijee and lauded him for his philanthropic and humanitarian activities for the poor and neglected. He said it is commendable that despite his age, Swamijee continues travelling abroad on his spiritual journeys. He thanked Swamiji for his many visits to the Temple to bless the devotees and enlighten them with his insightful discourses.

Swamiji then proceeded to bless Narender Reddy, Dr.Sreeni Gangasani, Sri Subbiah Emani,Dr.Sujatha Reddy, and Viswayogi Foundation  Atlanta coordinators, and all the devotees who participated in the Homam. After his divine blessings, all were served mahaprasadam and delicious lunch. 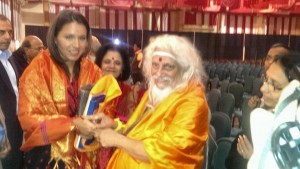 Later, in the afternoon, the devotees were treated to an enthralling dance- drama Mahishasur Mardhini, a colorful Kuchipudi dance ballet/drama by Natya Jyothy Kuchipudi Dance Academy and Kala Ratna Pasumarthy Venkateswara Sarma Garu in the Divine Presence of Poojya Swamijee. The dance ballet narrates the story of the killing of Mahishasura, evil demon king  by Goddess Shakthi. In this story, Mahishasura attains a boon from Lord Brahma, that he can only be killed by a Woman, which he thinks is impossible. Using this power, he defeats all gods including Lord Indra. With the help of Lord Shiva’s advice, all gods unite with all their powers, create a Mahashakthi, who is none other than Mother Shakthi, who kills Mahishasura.

The dance-drama received a rousing ovation from the audience. Swamijee appreciated the performance and conferred his Divine Blessings on all the participants. Swamijee especially praised the main teachers, Kala Ratna Pasumarthy Venkateswara Sarma Garu  and Jyothi Chintalapudi Garu. He bestowed the title of Viswa Nrutya Jyothi to Jyothi Garu, and Bharatiya Sanathana Dharma Sarma to Sarma Garu.  Alluding to  this performance, Swamijee said women cannot be treated lightly. Women are making progress in all parts of the world. He said that women should not be ill-treated, but instead loved and worshipped. He urged that one should worship five Mothers–Mother Universe, Mother Earth, Mother Country that one is born in, one’s mother, and Mother Cow(Go Mata).  Swamijee exhorted all to work towards strengthening India-U.S. bond and in promoting world peace.

All the proceeds of the Homam and dance ballet/drama were for the benefit Viswayogi Institute of Medical Science(VIMS). Atlanta’s well-known Cardiologist Dr.Sreeni Gangasani commented, ‘VIMS(Viswayogi Institute of Medical Sciences) with motto of sound mind in a sound body was inaugurated by then President of India Dr. Abdul Kalam in 2008. Main components of the hospital are Mother and child care hospital, Outpatient clinics, Emergency room services, and Research and diagnostic center.  Started as a free health camp in 1998, VIMS now accommodates 360 beds. At present outpatient services including medicines are being provided free of cost. The goal of VIMS is to provide full-fledged  inpatient services in the near future and to transform this hospital into a world class hospital.

Later that evening Swamijee met with  U.S. Congresswoman Hon.Ms.Tulsi Gabbard,who was in Atlanta to celebrate the 150th birth anniversary of Swami Vivekanand,organized by the US Hindu Alliance, at the Shree Shakti Mandir Complex. After exchanging greetings with her, Swamijee conferred his blessings on her.