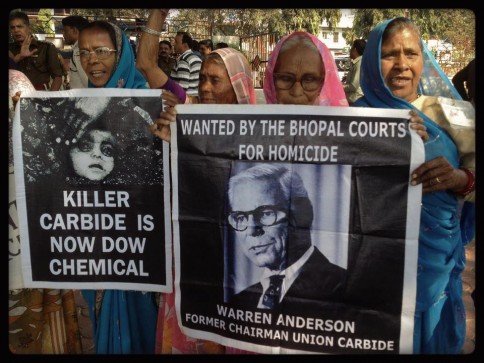 Anderson died Sep 29 at a nursing home in Vero Beach, Florida, aged 92, the Times said. His death, not announced by his family, was confirmed from public records.

Anderson flew to Bhopal four days after the world’s worst industrial disaster and was arrested. But after paying bail he left India and never returned to face trial.

Indian authorities made multiple requests to extradite him, and officially labelled him a fugitive. A judge declared him an “absconder”.

Toxic gas leaked from the Bhopal Carbide plant on the night of Dec 2-3, 1984 killing over 3,000 people instantly and thousands over the years. The plant made insecticides.

In 1989, Union Carbide paid $470 million to the Indian government to settle litigation stemming from the disaster. The settlement was denounced by rights activists as peanuts in view of the tragedy.

Anderson at one point of time “ruled over an empire with 700 plants in more than three dozen countries”, the Times said.

After the Bhopal horror, “for the first time in his life, Anderson couldn’t sleep; at one point he holed up for a week at a hotel…

“He and his wife, Lillian, spent evenings reading newspaper articles about the tragedy to each other,” the daily said.

When they went to restaurants, he was afraid to be seen laughing because people “might not think it was appropriate”.

In 1986, at age 65, he retired from Union Carbide. In later years he gardened and fished with his wife, who survives him, and baked Swedish bread, following an old family recipe.

His death passed almost unnoticed until an article appeared in Vero Beach 32963, the weekly newspaper of the Vero Beach barrier island.