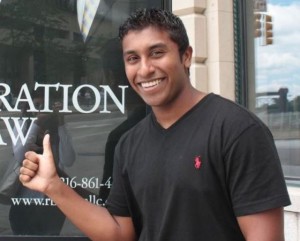 Washington, March 6 (IANS) Even as search continues for an Indian-American nursing student who went missing in New York 10 days ago another India native has mysteriously vanished on a spring break trip to Florida.

A police spokesperson said Jose’s clothing were found in a garbage can behind the house.

Almond said the 21-year-old senior is a native of Latham, a suburb of Albany, New York.

According to Jose’s Facebook page, he graduated from Latham’s Shaker High School before enrolling at Rice to study mechanical engineering.

Her parents said Saturday that they had paid for their daughter to enrol at New York Institute of Technology for the fall 2013 semester.

But university officials said Jasmine Joseph, who would have been a junior, hadn’t been a student at school in Old Westbury since last May.

The parents don’t know for sure whether she had been attending class, and they haven’t seen any of her grades, Newsday said.

They never, however, suspected anything suspicious about their daughter’s behaviour.

The family has set up a Facebook page and put up fliers in the neighbourhood with the hopes of gaining any clues into their daughter’s disappearance.

Last month, yet another Indian-origin student Pravin Varughese, who had gone missing in Illinois, was found dead in a wooded area in Carbondale.

The Southern Illinois University student from Morton Grove had disappeared after getting into a dispute with an acquaintance who was giving him a ride.