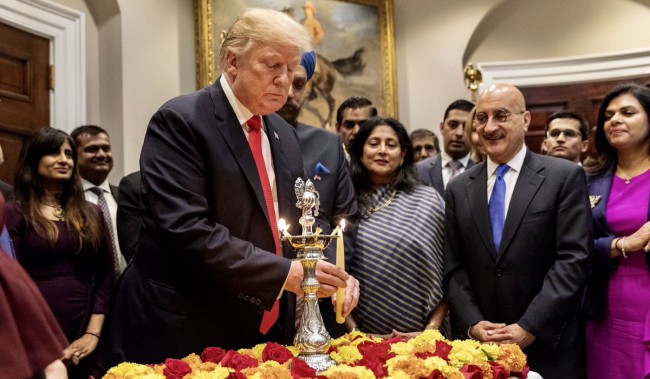 New York, Nov 14 (IANS) US President Donald Trump’s tweet calling Diwali a “holiday observed by Buddhists, Sikhs and Jains” has started a raging twitter storm over his apparent omission of Hindus, the members of the first and largest religion to observe it.
However, in another tweet, he said: “It was my great honor to host a celebration of Diwali, the Hindu Festival of Lights, in the Roosevelt Room at the @WhiteHouse this afternoon. Very, very special people!”
He also started his speech at the White House Diwali celebrations on Tuesday in the same way with a mention of Hinduism.
The problem apparently arose as his tweets based on his prepared speech were out of sequence and also because the first tweet was deleted and reposted.
After telling people assembled for the celebration, they were a “very impressive group; now I know you are very important, very impressive”, Trump read out from his prepared text: “I am thrilled to be here for the celebration of Diwali, the Hindu festival of lights and I am honored to host this beautiful ceremony at the White House.”
Then veering off his text, he added, “Very, very special people.”
He interrupted the Diwali speech at that point to talk about the wild fires ravaging California that have killed more than 40 people, thanking the firefighters and offering the victims support.
He picked up his Diwali speech after that, and continued: “We are gathered today to celebrate a very special holiday observed by Buddhists, Sikhs and Jains throughout the US and around the world.”
But social media with its few milliseconds reaction time responded rapid fires before his second tweet mentioning Hinduism appeared.
His first tweet was from the second part of the Diwali speech that set off the trolls.
A poster call Jeff Young shot off a tweet, “Hey, whoever wrestled Trump’s phone away to post this: Pretty sure Hindus also have some interest in Diwali.”
Another, Tom Phillips, tweeted, “Trump’s Twitter account posted a Diwali tweet that didn’t mention Hindus, then deleted it, then… reposted it again with a different link but still no Hindus?”
And so it went on tweet after tweet, with media like Time magazine and HuffPost also piling on.