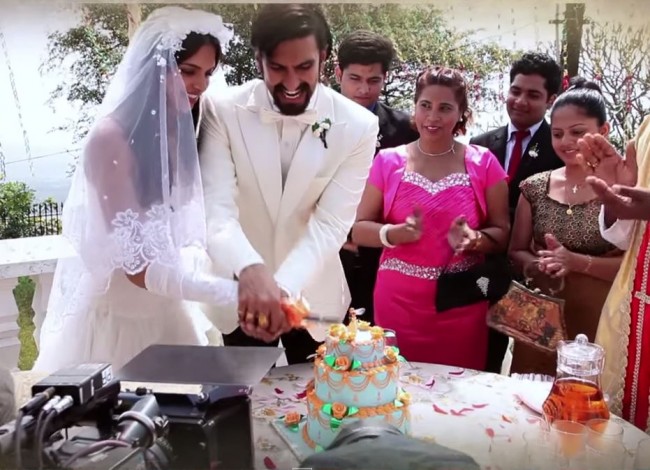 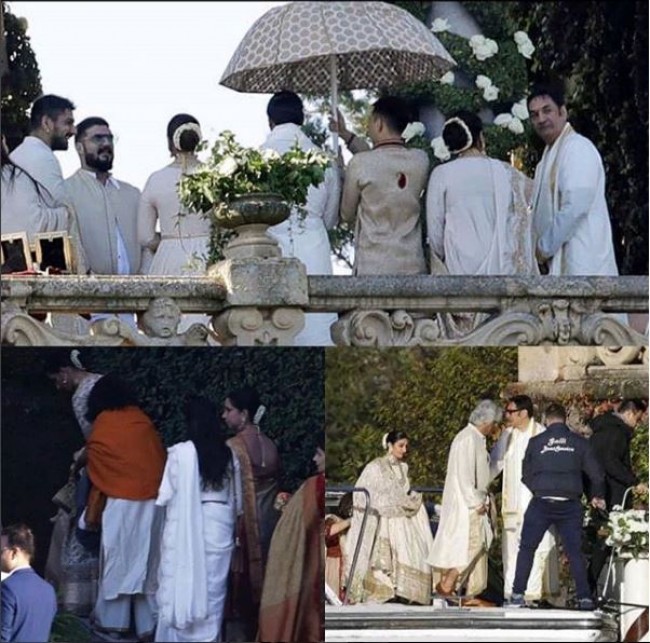 Bollywood stars Ranveer Singh and Deepika Padukone on Wednesday tied the knot as per Konkani traditions in a dreamy Lake Como setting in Italy amidst a tight circle of family and friends, culminating a six year-long love story in a ‘happily ever after’.

The ceremony began at 8 a.m. on Wednesday, and ended around 1:30 p.m. as per local time in Italy, those in the know of developments told IANS.

Deepika wore a red and gold lehenga, and Ranveer was dressed in white, with most guests dressed in pastels, keeping with the subtle and classy vibe of the upscale wedding venue.

Northern Italy’s Lombardy region, a resort area known for its spectacular scenery, served as the perfect backdrop for Deepika and Ranveer’s wedding.

While fans and the media yearned for pictures from the wedding celebrations on social media, only a few wide angle shots of the venue gave a hint of the elaborate set-up, decorated with the choicest of flowers.

The Konkani style wedding will be followed by a traditional Anand Karaj ceremony on Thursday.

Deepika, 32, daughter of badminton ace Prakash Padukone, is likely to wear a Sabyasachi ensemble for the Anand Karaj.

Fondly called as DeepVeer by their fans, the star couple have together worked in films such as ‘Goliyon Ki Raasleela Ram-Leela’, ‘Bajirao Mastani’ and ‘Padmaavat.’

There were only about 40 guests for the celebrations, but a no-pictures policy imposed on them, left the couple’s fans pining to get a glimpse of the gala.

Mobile phones were not allowed outside people’s rooms, and there were boats patrolling the lake for drones as part of the three-level security plan for the wedding.

The two left for the wedding revelry to Italy last week.

Deepika and Ranveer exchanged rings on Monday evening, and a more ‘desi’ touch to the celebrations came in with the ‘mehendi’ function on Tuesday afternoon, followed by a music-filled ‘sangeet’ the same evening.

For the mehendi, Deepika wore a Sabyasachi Mukherjee creation and the couple was colour co-ordinated. Singer Harshdeep Kaur, along with Sanjoy Das, Bobby Pathak and Firoz Khan performed at the ceremony.

Poles apart from each other in personality, Deepika and Ranveer’s love story began on the sets of filmmaker Sanjay Leela Bhansali’s ‘… Ram-Leela”. Their off-screen camaraderie gave enough hints to their fans, the media and the film fraternity that love was brewing.

But they never confirmed their relationship until recently. They put to rest months of speculation about their nuptials with a social media announcement in October of their wedding dates.

“We thank you for all the love you have showered upon us over the years and seek your blessings as we embark on this incredible journey of love, loyalty friendship and togetherness,” they said in the announcement.

Over the years, Deepika has been a bit more reserved than Ranveer in expressing her love openly, but the “Band Baaja Baaraat” actor has been uninhibited.

While they spoke a bit about their likes and dislikes about each other at a summit in the capital in October, it is only on “Koffee With Karan” that Deepika was a little more open about her relationship with Ranveer.

After their very private wedding ceremonies, the couple will have a reception each in Bengaluru and Mumbai on November 21 and 28, respectively.

They have urged their guests to direct gifts in the form of a donation to Deepika’s The Live Love Laugh Foundation, which works towards spreading awareness on mental health.