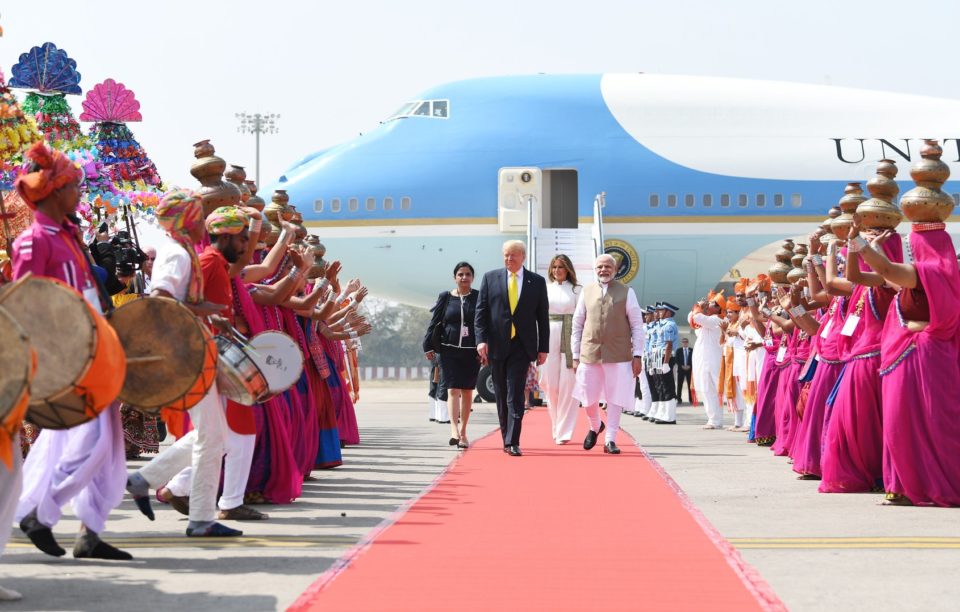 Ahmedabad/New Delhi, Feb 24 (IANS) After trying his hand at spinning yarn on Mahatma Gandhi’s ‘charkha’ in Sabarmati Ashram, US President Donald Trump enthralled a mammoth audience at the world’s largest cricket stadium by hitting all the balls on the US-India strategic partnership, out of the ballpark.

From his references about India’s philosophical and cultural icons to striking hard against the common enemy — Islamist terrorism, President Trump, in his maiden speech during his first state visit to India, weaved a broad narrative in exaltation of India as a modern and assertive democracy in alignment with American values.

On their way to Motera cricket stadium where the ‘Namaste Trump’ event was organised in his honour, the US President and his wife Melania stopped by for a few minutes at the Sabarmati Ashram, the house from where Mahatma Gandhi led his salt ‘Satyagraha’, 90 years ago.

A US delegation including Trump’s daughter Ivanka and son-in-law Jared Kushner accompanied them from the Ahmedabad airport to the Ashram. Enroute, the cavalcade was greeted by thousands of people.

At the Ashram, Trump tried his hand on Gandhi’s ‘charkha’ or spinning wheel while the First Lady and Prime Minister Narendra Modi stood by him. Though in the visitor’s diary at the national monument, Trump thanked Modi for the “wonderful visit”, he later in his address to 1,25,000 people at the Motera stadium, paid tributes to Gandhi by recalling his freedom struggle.

In a strong pitch on US-India friendship, President Trump said that he had come all the way from 8,000 miles across the world because “America loves India, America respects India and America will always remain a loyal friend to the Indian people. From this day on, India will always hold a special place in our hearts.”

Both the countries, he said, had been hurt by Islamist terrorism and are united in defending citizens from its threat. “Our borders will always be closed to terrorists and extremists. Anyone who threatens our security, will pay a big price,” he said amid loud cheers.

Trump boasted about his government’s accomplishments against Islamist terrorism. “Under my administration we unleashed the full power of American military on bloodthirsty killers of ISIS. Today ISIS territorial caliphate is 100 per cent destroyed. The monster Al Baghdadi (ISIS chief) is dead,” he said.

Without mentioning Jammu & Kashmir which was reorganised and whose special status was withdrawn by the Modi government last year inviting censure from Democrats in the US, President Trump made an oblique comment seemingly in support of India. “Every nation has a right to exercise its sovereignty and secure its borders,” he said. Incidentally, this has been the official line of India in response to the criticism in the US and negative campaign run by Pakistan.

However, he also indicated that the US was keen on taking Pakistan along for the sake of security. “For this reason, my administration is working positively with Pakistan. Our relationship with Pakistan is a good one. There are big signs of progress for greater stability and peace of all the nations in South Asia,” he said.

The President announced that India and the US were going to expand their defence cooperation and major defence partners. He pointed out that India and the US have recently conducted the ‘Tiger Trio’ — sea, air and military joint exercises. “We make the best weapons. We will sell India the best defence systems and secure the Indo-Pacific for our children and for many generations to come,” he asserted.

Trump commended Modi’s rise from a humble background as a “chaiwallah” in Gujarat to the highest position in New Delhi. “It is an incredible and moving story. Everybody loves him, but I tell you, he is very tough,” he said amidst echoes of “Modi, Modi” rent the air. He expressed admiration for the landslide victory with which Modi returned to power in the 2019 general election.

Recalling that Modi as a young man had worked as a tea-seller, Trump said that his example demonstrated that there was “limitless promise in this great nation.” With hard work, India can accomplish anything it wants, he said. “We are very, very proud of India,” he said, adding that the two countries shared a common philosophical foundations and outlook for democracy, liberty and equality.

India, he said, was inspiring as a “democratic country, peaceful country, towering country, a great, free country.” These values, he said, made all the difference as against those who exercise “coercion, intimidation and aggression”.