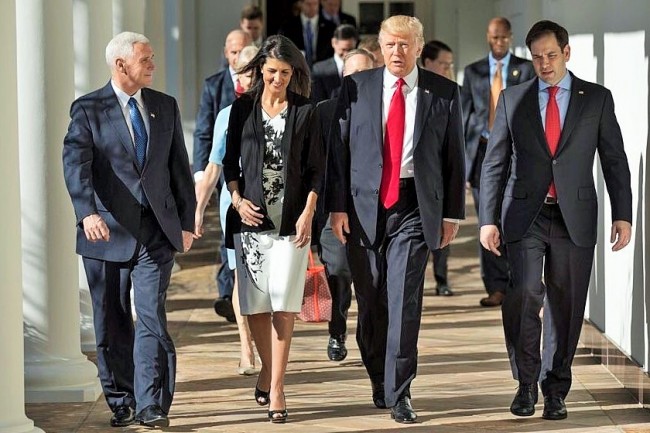 Washington, Jan 26 (IANS) US President Donald Trump is pleased that Nikki Haley, sworn in as the US ambassador to the UN, “is our nation’s first Indian-American cabinet level officer”, his spokesperson Sean Spicer told the media.

According to Spicer, Trump “had the honor to greet new ambassador to the UN, Nikki Haley, in his office” when she visited the White House after being sworn in by Vice President Mike Pence on Wednesday.

“It is a big deal for Indian-Americans throughout this country (US) and now she is able to get to work representing as our nation’s top diplomat,” Spicer said.

Haley has received support from both Republican and Democrat leaders and her appointment was on Tuesday overwhelmingly approved by the Senate with a vote of 96 to four.

Her position is one of the offices for which the Senate has to approve.

During her confirmation hearings in the Senate Foreign Relations Committee last week, senators emphasized her achievements as a consensus builder as Governor of the conservative state of South Carolina.

This was presented as an asset that would make up for her lack of diplomatic or foreign policy experience.

“As one of the most respected governors in the county, Haley has a proven track record bringing people together regardless of their background or differences to create opportunity in her state and now the nation,” he said.

Because of the persistent criticism of Trump and himself for making incorrect statements, Spicer hedged the new President’s description of Haley as the first Indian-American cabinet level official by adding the caveat “to the best of my knowledge at least”.

Haley indeed is the first Indian-American cabinet rank official in the US and has achieved that in the administration of Trump, who is described by his detractors as a “misogynist” and “anti-immigrant racist”.

The Republican Party has produced two Indian-American governors, Haley and Louisiana’s Bobby Jindal, which the Democratic Party has not matched.

Indian-Americans like Rajiv Shah, the head of the US Agency for International Development (USAID) under Democratic President Barack Obama, have held senior positions but not at the cabinet level.

Trump has so far appointed two other Indian-Americans to senior positions below cabinet level.

Ajit Pai was named the chairman of the Federal Communications Commission, the powerful regulatory agency for wireless spectrum, telephones, internet, cable, radio and television, and Seema Verma as the head of government health insurance programmes.

Haley had opposed the Republican President during the election campaign because of his statements about immigrants.

But finally, before the election day, Haley said she would vote for Trump. The then President-elect reached out to her to offer the ambassadorship.

Haley during her confirmation hearings said she would not hesitate to challenge Trump in the cabinet.

She also took a strong stand against Russia, which diverges from Trump’s policy of improving ties with the country.