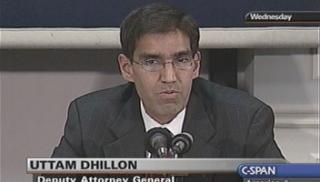 Washington, Jan 26 (IANS) US President Donald Trump has appointed Uttam Dhillon as his special assistant and associate counsel, making him the second Indian-American on his White House staff.

An expert on ethics and law, Dhillon will have an important role in ensuring that ethical problems do not arise from the businessman-turned-President’s extensive businesses, Trump’s spokesperson Sean Spicer said on Wednesday.

Trump’s extensive empire of over 400 companies that span the globe has raised ethical issues because of the intersection of business and government.

Dhillon’s appointment and the compliance team is an effort to ensure that ethics problems do not crop up or are doused as soon as they come up.

Trump announced earlier this month that he was transferring all his businesses to a trust that he was setting up to distance himself from his companies.

The trust will be headed by his sons Donald Jr and Eric.

Although the New York billionaire has resigned from his companies, a cloud of potential ethics conflicts hang over Trump because of the continuing family control of the business through the trust.

Trump earlier appointed Raj Shah, an expert in strategic communications and political research, as his deputy assistant and research director on the White House staff.

Apart from his personal White House staff, Trump has appointed three other Indian-origin persons to senior administration positions — Nikki Haley as the cabinet rank ambassador to the UN, Ajit Pai to head the Federal Communications Commission that regulates all wireless and electronic communications, and Seema Verma as the head of the government health insurance programmes.

Dhillon was the chief oversight counsel for the House of Representative Committee on Financial Services.

He was responsible for Congressional investigations of the financial services industry and government regulators.

He has also worked as an associate deputy attorney general in President George W. Bush’s administration and as the director of counter-narcotics enforcement in the Department of Homeland Security.