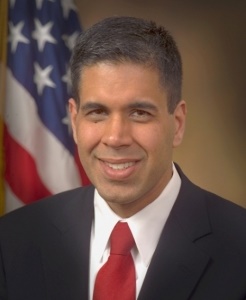 Washington, March 21 (IANS) US President Donald Trump announced on Tuesday that he is nominating Indian-American federal judge Amul Thapar for elevation to an appeals court, the second highest level of the US judiciary.

Describing him as “the son of Indian-American immigrants”, and the first federal district judge of South Asian descent, the White House said that if confirmed by the Senate, Thapar will join the bench of the Sixth Circuit Court of Appeals, which covers the two important states of Michigan and Ohio, in addition to Kentucky and Tennessee.

Thapar, 47, will be the second person from the community at the appellate court level, joining Judge Sri Srinivasan, who was appointed by the then President Barack Obama to the powerful bench that covers Washington.

Thapar is currently a federal judge in Kentucky, appointed by the then President George W. Bush in 2007.

The likelihood of Thapar’s confirmation by the Republican-controlled Senate is very strong and he has the strong backing of the Senate Majority Leader Mitch McConnell, who has described him as “a friend.”

His full name is Amul Roger Thapar. He has a law degree from the University of California at Berkeley and was a federal prosecutor in Kentucky before he was made a judge.

McConnell, who disclosed on Monday Trump’s plan to nominate Thapar, said in a statement: “I applaud the President for announcing his intent to nominate my friend, Judge Amul Thapar, to serve on the Sixth Circuit Court of Appeals. Throughout his already impressive career of public service, Amul has shown an incredible intellect and an unshakable dedication to the law.”

McConnel said he looked forward to Thapar’s confirmation by the Senate, saying: “He has earned the respect of his colleagues, and I know that he will bring to the Sixth Circuit the same wisdom, fairness, and ability that he has shown on the District Court.”

South Asian Bar Association President Vichal Kumar welcomed the nomination and called him a “respected and thoughtful jurist who has long served as role model for the South Asian and greater legal community”.

Srinivasan was on Obama’s short list of candidates for the Supreme Court. However, Obama finally appointed Merrick Garland to succeed the late Justice Antonin Scalia.

Garland’s nomination was not taken up by the Senate and it lapsed. Trump nominated Neil Gorsuch for the vacancy and Senate took it up for consideration on Monday.

There are likely to be other vacancies on the bench where there are three judges over the age of 77. Should a vacancy arise, Thapar is a stronger contender to be on the short list of candidates for the vacancy.