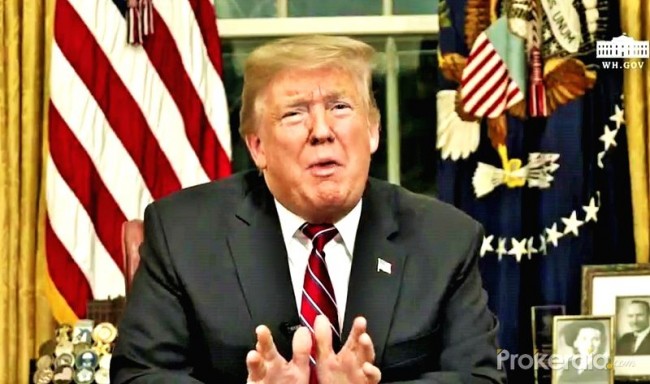 New York, Jan 9 (IANS) US President Donald Trump has invoked an Indian American “hero” police officer killed by an illegal immigrant to make an appeal to the American people to pressure legislators to fund the border wall he wants and end the government shutdown.

In his Tuesday night address to the nation from the Oval Office, Trump referred to the killing of Corporal Ronil Singh, saying: “America’s heart broke the day after Christmas when a young police officer in California was savagely murdered in cold blood by an illegal alien who just came across the border. The life of an American hero was stolen by someone who had no right to be in our country.”

Speaking in a measured, calm and composed way in contrast to his usual blustery, hectoring style, Trump said the border wall on the Mexican border was necessary to not only keep out illegal immigrants and criminals, but also the drugs that were ravaging country resulting in thousands of deaths every year.

As he spoke, the partial government shutdown caused by the standoff over the wall entered its 18th day, while a caravan of an estimated 7,000 Central Americans who had marched through Mexico were camped on border waiting to enter the US.

Democrat Nancy Pelosi, who took over as Speaker after her party wrested control of the House of Representatives, in her rebuttal appeared to make a case for opening the border to them.

“The women and children at the border are not a security threat, they are a humanitarian challenge – a challenge that President Trump’s own cruel and counterproductive policies have only deepened.”

Trump has demanded $5.6 billion in the federal budget to build the border wall that he had promised during his election campaign but the Democrats have blocked it and with both sides standing firm all but the essential parts of the government have been shutdown without a budget to pay for them.

The President is scheduled to meet on Wednesday with Congressional leaders in an attempt to break the impasse, but a compromise seems unlikely for now with both obstinate in their stances.

He made a distinction between legal immigrants like Singh and his alleged killer who came in illegally and was not deported despite prior arrests.

“America proudly welcomes millions of lawful immigrants who enrich our society and contribute to our nation. But, all Americans are hurt by uncontrolled illegal migration,” he said.

To gain sympathy from ordinary Americans, Trump focused on illegal drugs flowing in through the southern border, which he said kills more Americans each year than during all of the Vietnam War (about 58,000) and said the wall would stop the drugs.

He left no room for a compromise on the demand for wall barrier beyond saying that he would agree to a steel fence instead of a wall.

He asked voters to call their legislators and ask them to support the barrier.

In their televised reply to Trump, Democrat Chuck Schumer, the minority leader in the Senate, and Pelosi were equally firm about not funding an “ineffective, unnecessary border wall”.

But affirmed that they were for strengthening border security by using technology and improving the infrastructure.

They accused Trump of holding government workers hostage to get his wall and Schumer said that a way of the standoff would be to delink the wall and the shutdown by having a budget passed while continuing debate on the border barrier.

Pelosi accused Trump of trying to “manufacture a crisis, stoke fear, and divert attention from the turmoil in his administration”.

Schumer said: “We don’t govern by temper tantrum. No president should pound the table and demand he gets his way or else the government shuts down, hurting millions of Americans who are treated as leverage.”

Democrats are counting on the prolonged shutdown creating a split in the Republican ranks and having members of Trump’s party pressuring him to compromise.

Trump, though, is expecting his new persona of a self-possessed politician turning attention to the drug problem and minorities’ loss of jobs due illegal immigration would sway voters to call their legislators to support the wall.