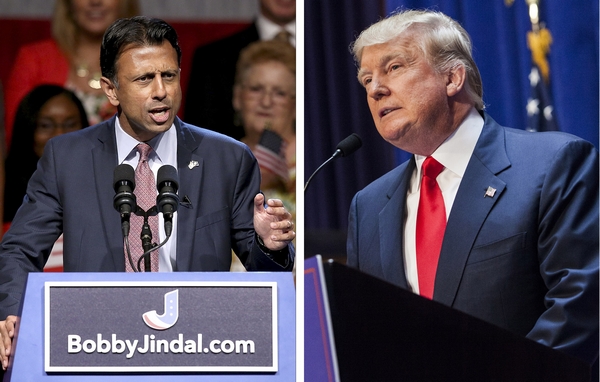 There are an estimated 11 million illegal or “undocumented” immigrants as the “politically correct” would have it, including about 300,000 from India, and both presidential hopefuls have vowed to stop more from sneaking in – Trump with a wall and Jindal somehow.

Tough-talking Trump, who has quickly leapt to the top of the crowded Republican field with his rants against the political establishment, asserted Friday that the US Congress could end the guarantee of citizenship for US-born children of illegal immigrants.

“In the case of other countries, including Mexico, they don’t do that. It doesn’t work that way. … We’re the only place just about that’s stupid enough to do it,” he said at the rally in the midst of several key Southern states.

Ratified on July 9, 1868, the 14th Amendment to the US Constitution granted citizenship to “all persons born or naturalised in the United States”, which included former slaves recently freed.

“We’re going to build a wall,” to stop illegal immigrants coming in from its neighbouring Mexico, repeated Trump, who has raised the hackles of his liberal critics by calling them “rapists” and “criminals”.

Trump’s campaign had moved Friday’s “pep rally” from the city’s Civic Centre, which seats about 4,000, to the 43,000-seat Ladd-Peebles Stadium in Mobile in anticipation of the huge crowd. By most accounts Trump’s enthusiastic supporters filled about half of it.

Meanwhile, Jindal, who was born three months after his pregnant mother came to the US from India, on Friday joined Trump in calling for the end of birthright citizenship.

But Louisiana’s two-term governor, who is languishing at the bottom of most polls, made sure to point out at an event in Columbus, Ohio that when his parents immigrated, “they came to this country legally”.

Returning to his now familiar theme about being tired of hyphenated Americans, Jindal said anyone who wants to come to the US must “learn English, adopt our values, and when you get here, roll up your sleeves and get to work”.

“Immigration without assimilation is invasion,” he declared at a Defending the American Dream Summit hosted by conservative Americans for Prosperity.

Claiming that he could secure the southern border with Mexico within six months of becoming president, he said officials in Washington should be fired for making excuses about securing the border.

Most Republican presidential hopefuls have hardened their stance on immigration in the wake of Trump’s climb to the top.

Even establishment favourite Jeb Bush courted controversy Thursday when borrowing a phrase used by Trump, he referred to US-born children of undocumented immigrants as “anchor babies”.

In a testy exchange with reporters in New Hampshire, Bush said that he doesn’t believe the expression is offensive and blamed Democrats for perpetuating the notion that it is an insult.

“Do you have a better term?” he asked one reporter. “You give me a better term and I’ll use it,” said Bush, who otherwise advocates comprehensive immigration reforms and has said “that people born in this country ought to be American citizens”.