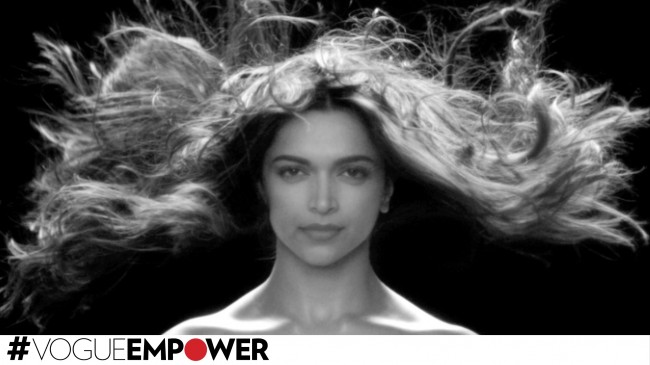 Mumbai, March 30 (IANS) Deepika Padukone, who has made strong statements about women’s rights in a short video, is an example of a single woman who lives by her own rules and has fought against the odds in a male-dominated industry to reach her position, says the video’s director Homi Adajania.

Adajania’s over two-minute visual piece for Vogue is based on a powerful poem called “My Choice”, written by Kersi Khambatta. It talks about every womanÂ’s right to equality and Deepika has not only contributed to the words and visual concept, but also lent her voice to the film.

Â“The film has been visually represented by moving portraits of 99 women in black and white who express themselves spontaneously to the lines narrated by Deepika,Â” said Adajania, who has earlier directed Deepika in films like “Cocktail” and “Finding Fanny”.

Sharing his journey of working with the actress, he said: Â“Deepika is totally in the film…I truly admire Deepika for the person she is.

Â“I know the trials and tribulations she has faced as a single woman. She lives by her own rules, is dedicated to her craft and fights against the odds in a male-dominated industry to get and stay where she has.”

The filmmaker says that through the video, which has garnered over 2 million views on YouTube, he wanted to showcase Â“Indian women as strong, uninhibited and inspiring”.

Â“No amount is ever enough for creating awareness on womenÂ’s empowerment. In India, gross gender inequality has been around for so long that change has to begin with awareness and acceptance of the fact that it exists and that there is something very wrong about it. History has dictated a place for a man and a woman and what each has to do. But thatÂ’s history and I donÂ’t find this necessary today.

So how he see this Vogue Empower initiative change the society?

Â“I believe there is still a long way to go but every step counts. With Vogue Empower, because they are going at it on a large scale there is more awareness which is very important.

Â“WomenÂ’s empowerment, I think, is an issue which needs to have longevity and this is where I appreciate VogueÂ’s initiative — that it is an ongoing process. ItÂ’s not that there is a beginning and an end to it. Their plan is to sustain something powerful that they have started and keep reinventing every quarter as to how and what new they are going to bring. ItÂ’s a commendable effort,Â” added the filmmaker.