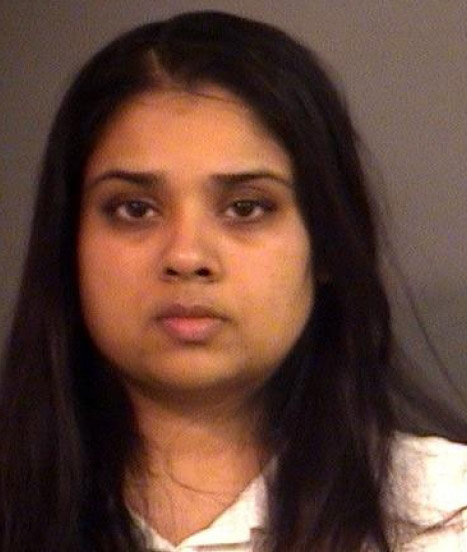 Washington, March 31 (IANS & Staff) An Indian American woman has been sentenced to 20 years in prison following her conviction last month for of female feticide.

Purvi Patel, 33, comes from a family of Indian immigrants who settled in Granger, Indiana, a suburb of South Bend.

In July 2013, she showed up at the emergency room of St. Joseph Regional Medical Centre in the town of Mishawaka, bleeding heavily. Doctors quickly realised she’d lost a pregnancy and she confessed that she’d left the fetus in a dumpster outside Moe’s Southwest Grill in Granger, a restaurant Patel’s parents owned.

Patel’s defense argued that Patel, who’d gotten no prenatal care, had had a sudden miscarriage and that the fetus was not born alive. Much of Patel’s trial centered on the alleged gestational age of the fetus: Patel’s defense argued the fetus was no more than 22-24 weeks old, and thus not viable even in a medical setting. Prosecutors argued Patel’s pregnancy was up to 30 weeks along and the baby had been born alive, reports pri.org.

There are also concerns Patel may be a victim of wider political dynamics in Indiana, reports pri.org. The judge, Elizabeth Hurley, the first superior court appointee byIndiana’s conservative governor, Mike Pence, allowed the jury to view a video of police interrogating Patel in post-operative recovery, despite defense arguments that Patel’s Miranda rights were ignored and she was recovering from sedation and severe blood loss during the questioning.

Patel is the first woman convicted of feticide in Indiana, and only the second to be charged.

Chinese immigrant Bei Bei Shuai faced feticide charges two years ago in the state, and both cases highlight an emerging “gray area” for pregnant women within the US legal system.

At the sentencing, Patel’s supporters wore purple and white and were joined by members of the ‘Indiana Religious Coalition for Reproductive Freedom and Apna Ghar’, a Chicago-based group advocating Southeast Asian women’s rights. Patel’s defence is expected to file an appeal.

“Ms. Patel lives with her parents and grandparents, and has worked for eight years building up the family business, Moe’s restaurant. She works at the restaurant seven days a week, returning home each night to cook for the family and physically assist her grandparents, who are in their nineties,” the appeal says.

”Now that she’s been given a 41-year sentence, with 20 years to be served in prison, she worries about what will happen to her family, who may well lose everything. Can you help Purvi Patel and her family today?”